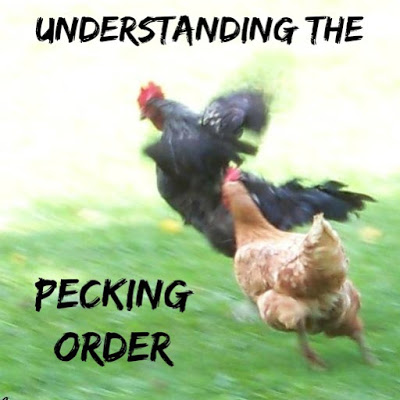 If you intend to have more than a single chicken, you are going to need to know a little bit about the “pecking order” and how it works. So what is a pecking order anyway? It is a hierarchical pattern of behavior in a flock. In plain English it means there is a top bird who runs the show and all of the rest of the chickens fall in line under it, depending on rank within the flock.

Generally the top bird gets first crack at food, water and treats. Other members of the flock will “make way” for the alpha. An alpha can either be a rooster, if your flock has one, or a dominate hen will fill the role if you don’t.

If you have a rooster, and only one rooster, he will likely take the alpha role as he reaches maturity. If you have more than one rooster in your flock, the roosters will battle for dominance. With enough space and hens available, multiple roosters will create their own mini flocks (the hens they watch over) within the larger flock and can coexist without to many squabbles.

In a flock composed entirely of hens, there will be one dominant female who will establish herself as the alpha in the absence of a rooster. Younger birds are typically lower in the hierarchy, and older or more aggressive birds will rise to the top. If you later introduce a rooster to your flock, the alpha hen may continue to hold rank, even over the rooster if he is young. We had two roosters who our alpha hen, Grumpy Goldie, not only put in their spot, but kept them there till we rehomed them.

So how do chickens establish a pecking order?

Believe it or not, the pecking order begins the moment they come out of the shell. When we hatched eggs last spring it was interesting to watch the whole dynamic begin as the various eggs began to hatch. The first born chick tried to establish dominance by peeking the next hatching chick as soon as it was out of the shell. But the peeking order is fluid thing, and once all the eggs hatched and the chicks were moved to the broader, the cute little fluffy chicks continued to peck each other. It may have looked cruel, but they quickly sorted things out and the first born was NOT the alpha of the group.

As birds age or members of the flock come and go, the social structure will fluctuate. The stronger (and pushier) birds will move up in rank while the more submissive will move down in rank. And while the chickens maintain the pecking order, it can sometimes appear that they are extremely rude, but it is the natural behavior of flock dynamics. A balanced pecking order is necessary for the flock to function properly. When each bird knows where it stands, the flock will be content and live in harmony.

So what are the benefits and responsibilities of the alpha in a flock?

Well, being top dog, or chicken in this case, comes with some advantages. The alpha has first choice on food, first access to feeders and water, dibs on the best treats, favorite nesting boxes, preferred dust bathing spots, and the highest roosting spots. Alpha chickens will maintain this control through clucks, stance, and the occasional peck. We have hens who have been together for years, but occasionally our alpha still takes a peck or two at the more submissive birds to remind them of their place.

As the alpha in a flock, that bird takes on the responsibility of making sure the flock dynamics are upheld. If it is a hen, think of her like the mom. She makes sure everyone not only stays in line, but leads the way when it comes to foraging for food, seeking shelter, and warning the others of danger.

Introducing new members to the flock…….

Since the pecking order chances over time, with the introduction of new birds or the loss of other, remember there will be disputes. Just like if a hen or rooster is sick or becomes injured they will lose their place in the pecking order and will need to fight for it again once they recover, new birds will also have to assert themselves to gain ranking in the flock. Disputes can be minor and last only a few seconds with a peck or two, or they can turn downright nasty and end with serious injuries or even death. While I like to let my flock figure it out themselves, I will step in if it becomes too much. I don’t need injured birds!

But what can you do?!?! Well there is always time out. It works for kids, right? Why not for chickens? If someone in my flock gets too big for their feathers they get to spend a little time separated in a temporary pen where the individuals involved can see each other and “talk out” their differences without injury.

To avoid serious injuries when introducing new chickens to your existing flock, it is best if they can see and vocalize at each other, but can’t physically interact. We put our new members, usually chicks, in an upside down baby play pen, this way my older hens can see the babies but can’t hurt them. This gives everyone the chance to start the pecking order process by getting acquainted without coming into contact with each other. As they size each other up, you can kind of get an idea on how they may act once they are together.

Everyone feels bad for the underdog, but in every group, there is a low man, someone who brings up the rear. It’s just the way life is. You can help avoid conflict by providing multiple feed and water areas, plenty of roosts in the coop, and plenty of “hiding” places for lower ranking members to get away from or avoid more dominate flock members.

You and the pecking order…..

Yes, you are part of the pecking order! Your chickens will view you as a member of their flock, which places you in the pecking order. Let me tell you, you do NOT want to be at the bottom of the hierarchy. Why? Well, sometimes a rooster will try to challenge a human. If a chicken (predominantly a rooster) dances around you with its wings out and charges towards you they are trying to dominate you. This is when you need to establish YOUR dominance as some roosters will peck and jump at you with their spurs and will attack you if you turn your back.

If you catch aggressive behavior early you need to put a stop to it. Never run from the bird, this only reinforces their view that they are dominate over you. You should stand your ground or even run and chase the bird! If a bird still tries to attack you, you can grab them and pin them down on the ground. Gently hold the bird on the ground until it calms down. You may have to do this a few times, but a smart bird will soon learn its place.

Sometimes you will find a bird, usually a rooster who just will not give up on trying to dominate you. In that case you have limited choices. You can live with it, rehome it (make sure you tell the new owner it is aggressive) or send it to the stew pot.

Most people get chickens to enjoy not only the eggs, but the company of the birds. Understanding flock dynamics will give you a better insight into the “secret” lives of chickens. It will help you identify if your flock has needs, like more feeding stations or nest boxes. Understanding the pecking order is fascinating (it is like watching a soap opera) and rewarding (a happier flock.) And just remember, the pecking order is a natural process that once settled will make for a harmonious flock!

25 thoughts on “Understanding the Pecking Order”