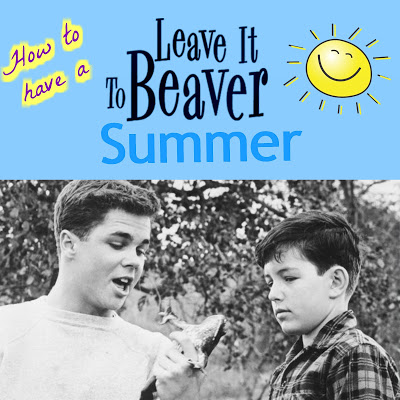 I will be the first to admit that like other kids in his generation, the oldest country kid has a desire to be a screen addict. Be it television or computer, he wants to just plop in front of it and let his mind turn to mush. Since we homeschool, I think he spends more than enough time sitting on his bum in front of a screen for doing his work! Necessary evil I guess.

Recently my hubby and I got into a little discussion about how much time the country kids sit in front of the computer or watching cartoons. My hubby claimed that in this day and age there is no way our kids could have a “leave it to beaver” summer like we did growing up. I disagree 100% In fact his words lit a spark in me to do exactly that! Welcome to operation “Leave it to Beaver” summer!

But what is a “Leave it to Beaver” summer? It is more then just unplugging from technology. Once the screens are gone, the “I’m bored” starts. And do you know what? That is a great thing! Seriously, boredom pushes creativity. Go find something to do! I admit, at first it was hard for them, so I created a box full of items from the dollar store to help them figure out what to do. There were coloring books and crayons, little building kits, painting projects, yo-yos, Styrofoam planes, bubbles, etc. I told them if they were board, check the box. I am not a cruise director or a taxi service. I will not be entertaining them non-stop with Pinterest crafts or running them non-stop to camps.

And do you know what happened that first week? 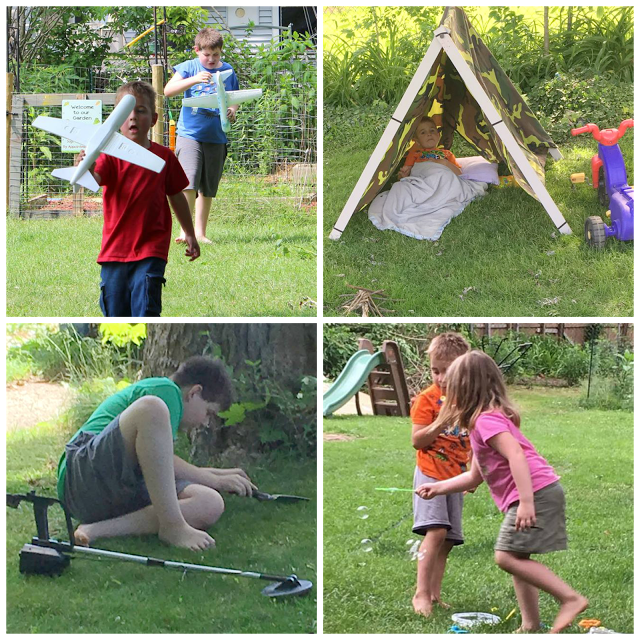 They became backyard pilots! The boys who never played nicely together were now best of buddies! Okay, not best buddies, but their relationship improved because they had to interact with each other to beat the boredom. Their imaginations blossomed. They found new hobbies and played with other kids, doing simple activities that made them laugh and smile!

The next week I did add in some away from home activities for them, I mean even I get bored just being at home. We went to a park (there were only three other kids and they only stayed a short time) and got hand scooped ice cream at a local pizza parlor. While the country kids enjoyed sliding down the slides (which were wet from rain the night before) and trying out the equipment, they soon got “bored” of that. 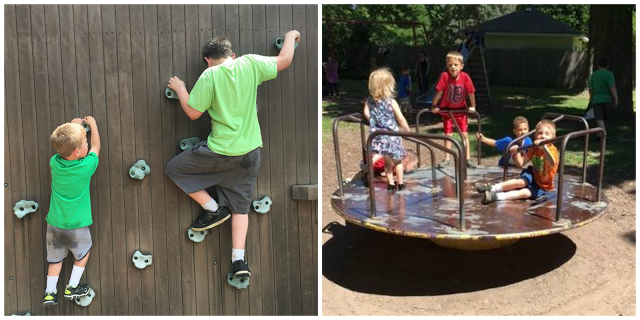 So we found a library in the park event in another town, where there would actually be other children to play with. I just sat back and let them run free. I don’t helicopter parent, oh no. Got a problem? Figure out how to handle it. Don’t like the way another kid is acting? What should you do about it? Not only were we unplugged, but now they were practicing life skills. How to make new friends, compromise on what to play, taking turns, and so forth. You would not believe (or maybe you would) how many kids have none of these skills. And I am talking about kids who attend public school and supposedly are being socialized there. Yikes! And they never will develop these skills if parents don’t back off and let them interact with other kids and solve there own issues. Come on parents, back off! I remember as a child, spending hours in the park with other kids and NO parents. We all survived. No one had to stand there and tell us who’s turn it was to play on the swings. 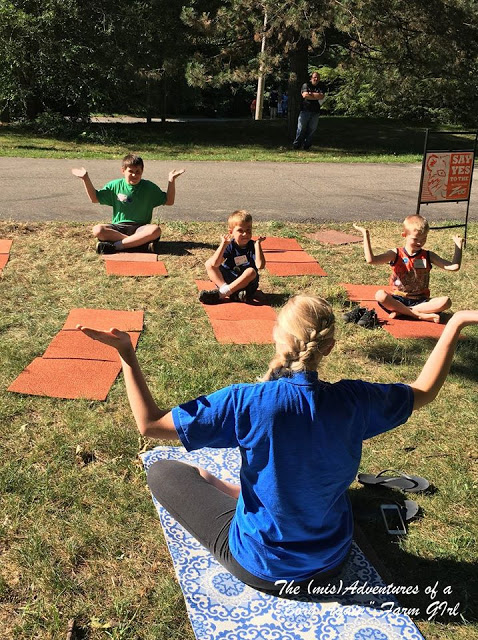 We spent time at the zoo, which we do one a month as part of an autism spectrum program the oldest country kid is involved with there. If you didn’t know, he has Asperger’s. I challenged both the country kids to try try new things, like yoga (even though their father would have let them skip it.) If kids don’t try new things, how will they know if they like the activity or not? It is good to get kids out of there comfort zones now and then. So many kids today get a free pass on trying new things because society says we shouldn’t make them uncomfortable.

The oldest country kid loves to fish but not touch fish. Well you can’t fish unless you can bait your own hook and remove your own fish. You don’t get to have the fun without the work! Being forced to be uncomfortable has made it possible for him to not only handle these tasks, but builds his self esteem when he realizes he CAN do things. The oldest country kid thinks he is suck a pro now, and was so excited to share fishing with his little brother. Learning how to fish it a right of childhood, even if it means throwing the fish behind you when you try to release it. You don’t learn unless you try! 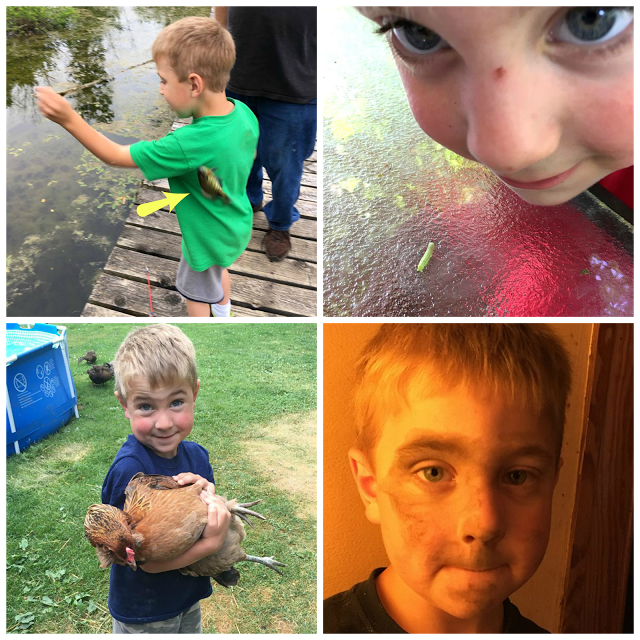 Kids need to slow down. Childhood flies by so fast these days with camps, lessons and scheduled commitments. When I was a kid, we didn’t have play dates. You just bumped into other kids in the neighborhood and played. Trust me, a kid who is allowed to slow down is less stressed and from my experience, much happier. They make friends with nature because they have time to interact with it. As part of our “Leave it to Beaver” summer, I just kick them out of the house! Yup, that’s right. Need someone one to play with? Go find a chicken or an inch worm. Get a scrap on your nose or knee. I’ve got band-aids. 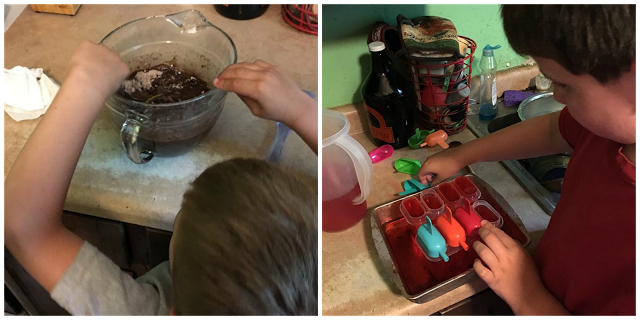 Another thing the country kids are doing as part of our “Leave it to Beaver” summer is learning their way around a kitchen. Why? Well, because we once had house guests and the mother was still making her 16 year old son his morning bowl of cereal. To me that was crazy! Kids should know how to feed themselves. We started with simple things like making brownies and popsicle. The pride of making something is a great way to build up a child’s self reliance levels. Now they come in from playing and make their own lunches! Egg salad sandwich anyone?

The more a child does for themselves, the more they believe they can do things. It is a snow ball that builds quickly. Having independence and the self confidence to try things makes them stronger people. So throw some ingredients on the counter and step back! Even if they mess up, they are still learning. Trust me, the ketchup, swiss cheese sandwiches were a total fail, but it hasn’t stopped them from trying. And it isn’t just food, they are more willing to try many new activities now that their confidence is soaring. 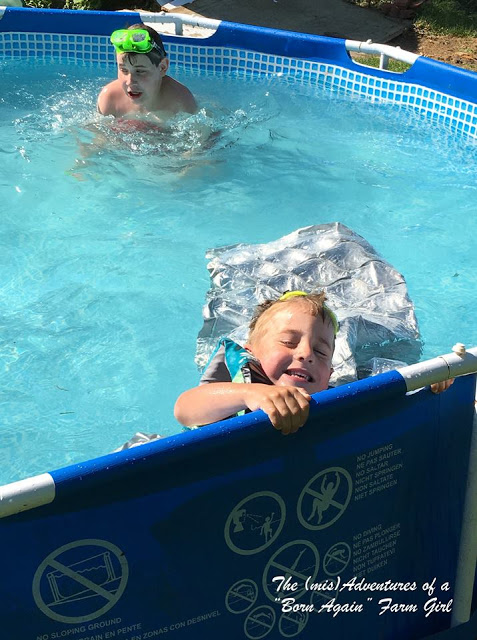 Of course the country kids are spending hours in the pool this summer. What kid doesn’t like to splash around. The littlest country kid’s self confidence has grown so much that he has even started going in the pool without a life jacket! They have so much fun and get such great exercise (something so many kids today lack) by just being out there splashing and playing games together.

Now I am not a total anti-screen advocate. I mean I did have an Atari growing up, so on overly hot or stormy days, I do let them play a little Wii. It is so funny to listen to them fight, laugh, and learn to work together to accomplish goals. And we have had popcorn and a movie time with old fashion candy. They both loved the Bottle Caps and Cow Tails.

So how do you have a “Leave it to Beaver” summer?

1.) Cut the screen time. Yes, they will complain but stick with it!
2.) Provide a box of cheap and “old fashion” activities they can use.
3.) Take them were there are other kids. Not a play date.
4.) Have them try new things.
5.) Dump the schedules.
6.) Don’t be a mediator, short order cook or taxi. They will survive.
7.) Support them, but stand back, be it in the park or the kitchen, and especially when fishing, because getting hooked hurts!
8.) Encourage imagination
9.) Lock the doors to keep them outside if you have to!
10.) Relax and watch your children grow.

Rip off the bubble wrap people! Not only let them get dirty, challenge them to see just how dirty they can get! If a child can take a bath in the summer and the water doesn’t turn grey, they need to play harder! Seriously, the littlest country kid can spend hours in a pile of dirt, entertaining himself, building his imagination. If you are a kid and you don’t have scraps and bruises from playing, your doing it all wrong! Life is an adventure, but let them find it on their own terms, at their own pace. Cut the classes, camps, and play dates and just let them be. They will surprise you on how fast they learn to fill their days with simple joys of childhood. 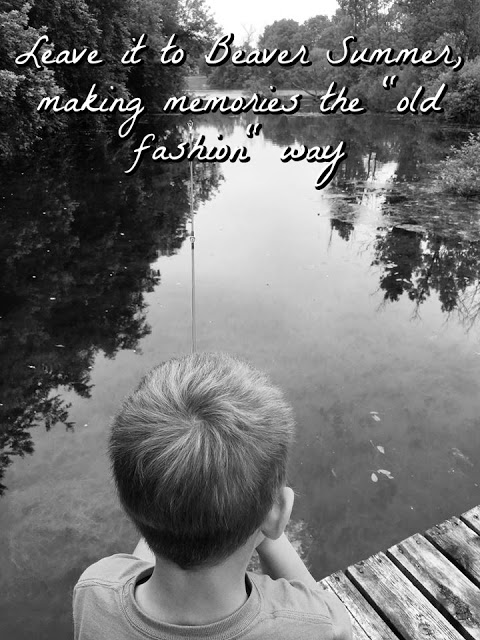