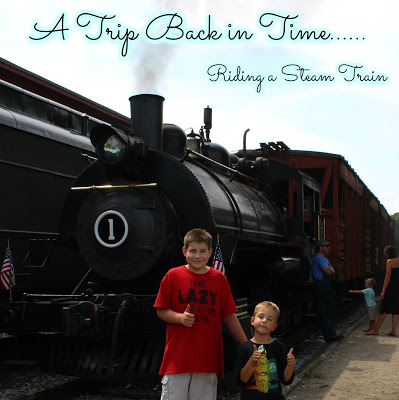 Recently hubby had a week of vacation time. Since we really couldn’t afford a “real” vacation, not to mention we can’t really leave all the critters to fend for themselves, we did a couple day trips to add a little spice to our lives.

The littlest country kid had been asking for some time if we could ride a train. There are tracks that run through our tiny town and he loves to ride his bike to the end of the street to watch trains pass a few blocks away. I really wanted to make his dream come true, but was having a hard time finding anything local and affordable. I was about to give up when I came across the Little River Railroad about an hour from our house.

Normally they charge $20 a person for their steam train rides, but lucky for us they were hosting their Lazy Days of Summer Specials. Of course the ride was shorter than their normal run, but then again, it was only $10 a person, which was totally doable for our budget! So we decided to load up the country kids and make a little boy’s dream come true.

I would like to say this trip was one of those picture perfect life moments, but if you have ever “met” my family, you know things don’t always go so smoothly. We are not one of those polished social media families that everyone envies. We are just normal folks, like you, trying to make memories. And let’s be honest, this story wouldn’t be half as interesting or memorable without those added “real life” moments…… 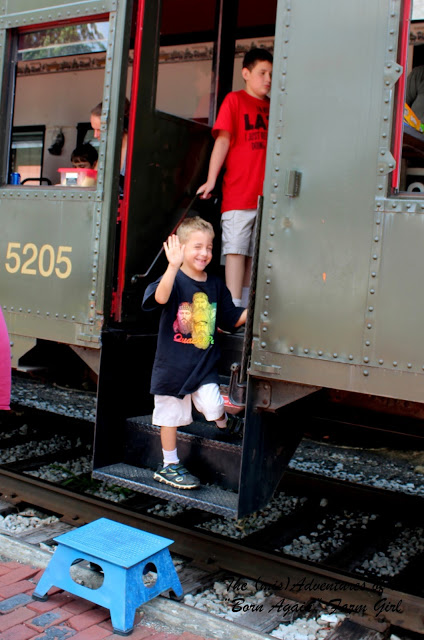 On the appointed day for our train ride, the littlest country kid couldn’t find one of his shoes when it was time to go. The next 15 minutes had every member of the family racing around looking for his shoe inside and outside. It was frustrating and nerve wrecking considering we had to get to the station before the train left without us! Unable to find his “going out shoe” we loaded the boys into the car where I sat with his “play shoe” and a bottle of crazy glue attempting to make it wearable in public.

We barely got to the train station in time to snap a photo and get on the train! *smacks forehead* This little adventure was not off to a good start, but I was determined to make it a day he wouldn’t forget. After all, this little boy had been begging to ride a train! 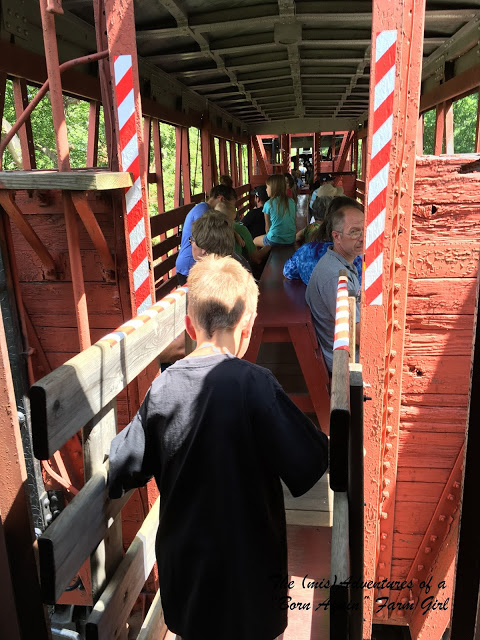 The train consisted of the steam engine, two cattle cars, a “dinning car,” and a caboose. Since we barely got there in time, the only seats still open were in the front cattle car, right behind the engine. It was a very warm day, so I didn’t mind much that we were in the cattle car. The breeze of the open car would be welcomed and I love the smell of a steam train. The chance to watch the engineer at work would be something not everyone gets a chance to see. This was going to work out just fine! We made our way to our seat and settled in. 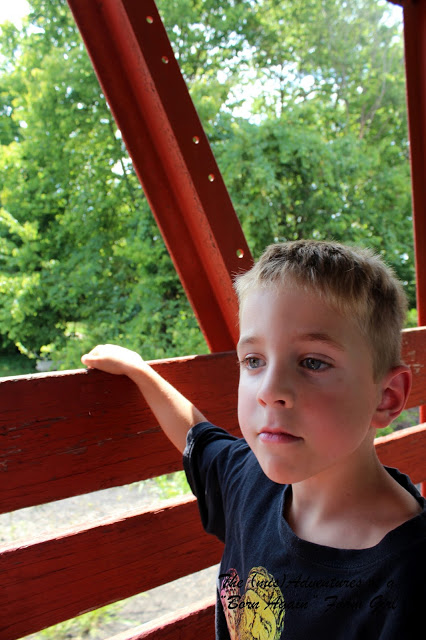 As the train began to roll out of the station, I could tell my train loving son was a little nervouse, dispite his joy of finally getting to ride a train. The sounds of the steam engine and the clickty clack of the wheels were VERY loud. The car bumped and shook as we headed out. 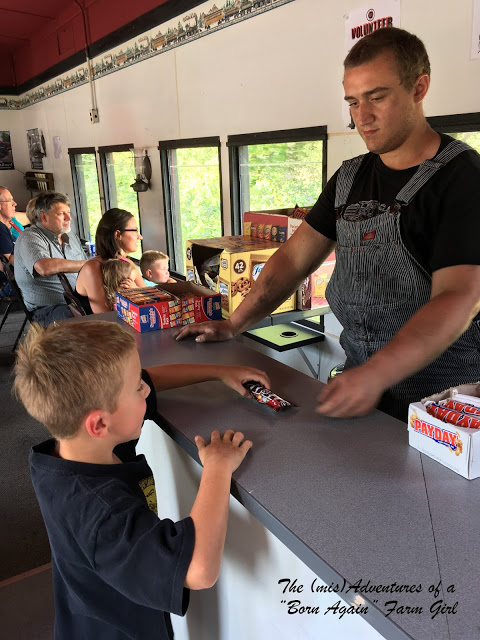 In an attempt to get the littlest country kid to relax, we made a trip to the “dining car.” Yes, were were allowed to move between cars as we were rolling alone. The folks who ran the train had made little walkways with railings between the cars for saftey. After purchasing his little bag of M&M’s from a railworker (as he dubbed him) we made our way back to the cattle car. Chocolate makes everything better, right?!?!

Now I would like to report the chocolate made the ride better, but the train whistle made it impossible for the littlest country kid to even eat them because he said he had to keep his hands over his ears. So the bag of M&M’s slowly melted between his knees where he held them tight as to not loose them as we bumped along. 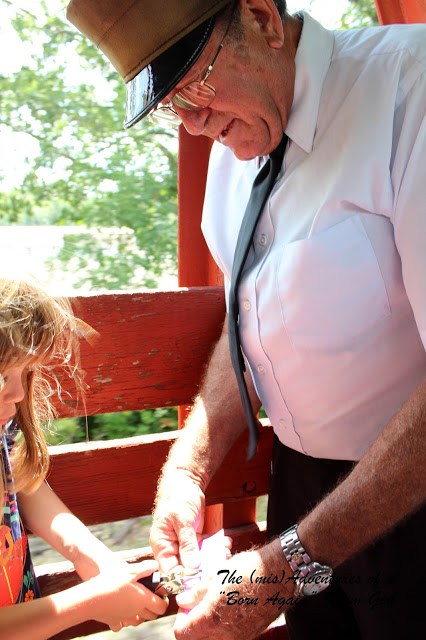 The conductor and his granddaughter made the rounds, punching tickets and chating with passangers. The whole time my son sat, hands over his ears, M&M’s melting, and looking less then comfortable with his situation. As we neared the station on our return, the engenier announced that if any of the kids would like, they could come pull the whistle. Of course our oldest made a beeline to the front of the car for a turn. Sadly, my little guy who really wanted to ride a train didn’t budge an inch. When I asked if he wanted to tug the whistle he said he couldn’t do it because he couldn’t pull and cover his ears at the same time. This was turning out to be a heartbreaking activity!

When they announced it was the last chance to give it a try before we pulled in, I told him to hand over his mostly melted M&M’s and to follow me to the front. A look of terror on his face, hands firmly clasped over his ears, he follow me. They handed him the pull rope and he looked at me torn between wanting to do it and scared of the sound. I gently slipped my hands over his ears, smiled at him, and told him to go for it. Finally, after 45 minutes of what seemed to be torture for him, a gigantic grin spread across his face! 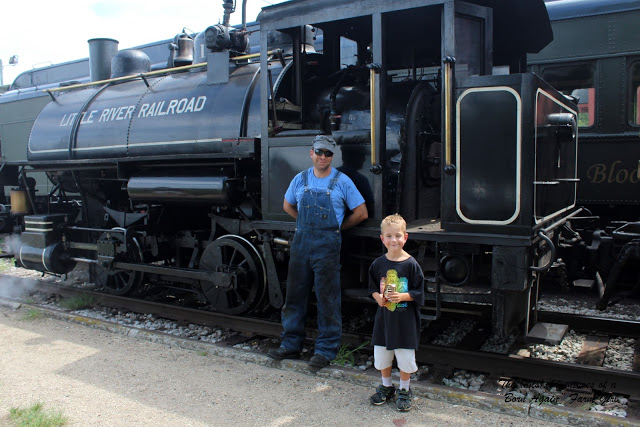 We barely made it to the train….. He spent 45 minutes trying to block out the sound of the ride…. But in those last few minutes his love of trains and the joy of finally getting to ride one came through! After we pulled into the station, the engineer let the boys come check out the steam engine and you can see by the look on his face, all the drama was worth it in the end. When he remembers this day, he might remember the shoe and almost missing the train. He might remember the bumping and shaking, the loud noise of the whistle and the smell from the coal. But I know for sure he WILL remember the joy of pulling that whistle on his first ever train ride! 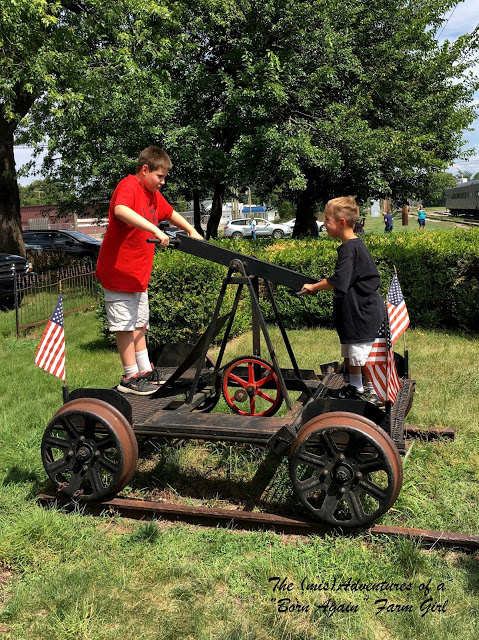 10 thoughts on “A Trip Back in Time…. Riding a Steam Train”