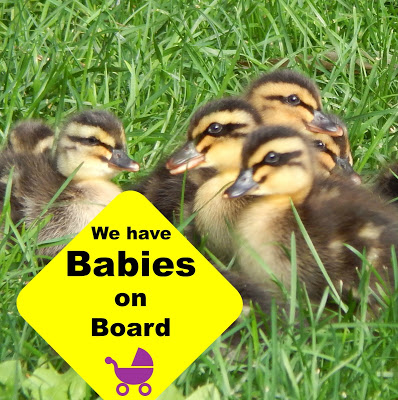 If you have been following us lately, you will know our female duck, Betty, pulled a quick one on us and hid a nest of eggs. I THOUGHT they were due to hatch around today…. I was wrong! The babies started hatching on July 7th! It was a good thing I already had some duckling food on hand!  Things got a little rocky over the next three days, but I was prepared to play my part as a duck midwife.

What started as excitement seeing the eggs start to pip, quickly turned to tragedy. One of the ducklings perished trying to escape from the egg. The shells on Betty’s eggs were extremely thick and rock hard. The membrane inside the egg was drying out too fast. The ducklings were becoming saran-wrapped inside the shell, unable to break free. So, ever so often over the next three day, I would go check her nest to see if any of the eggs need help.

Out of the remaining 10 eggs, I “birthed” 8 of them. Carefully I dampen the membrane with a warm, wet paper towel and slowly chip off the shell. It was a slow process and very nerve racking as you do not want to cut any of the blood vessels in the membrane or the baby duck could bleed to death. Let me tell you, by the fourth egg, I had this birthing baby ducks thing down, but it was still nerve racking to do! 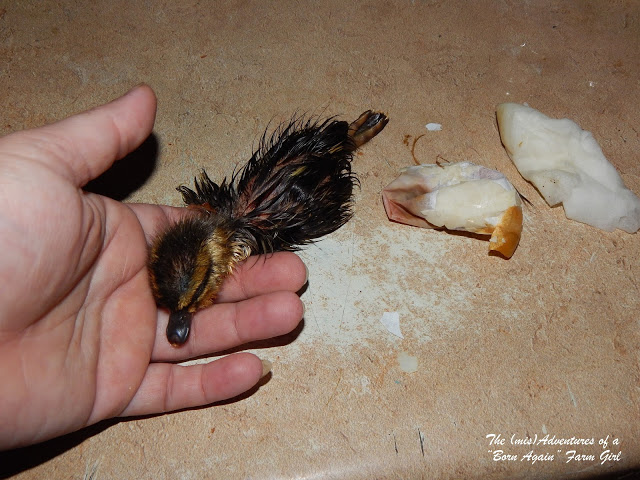 It is amazing to lift up a duck and see eggs pipping (starting to hatch) or to see a bill peeking through the shell! Better yet, to see a fully emerged duckling. Only two of the eggs fully hatched on their own. Those were some tough ducklings with a will to get out! 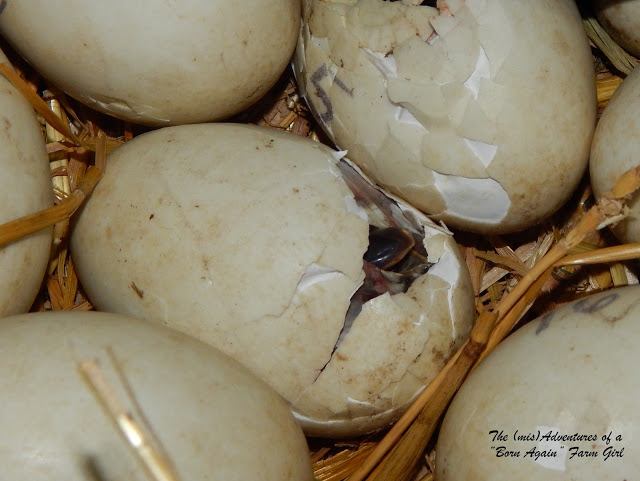 You don’t expect to lift your duck and see a fluffy head with a body still trapped in an egg like the little guy below. Our dog, Heidi the homestead hound, was very interested in sniffing this little one’s head as I worked to free the rest of him. In fact, Heidi assisted me on every birth I did. Her ears twitched and she would have a worried look on her brow till each baby was fully out of the shell and then she would just lay down on the floor, like she knew that everything was okay. 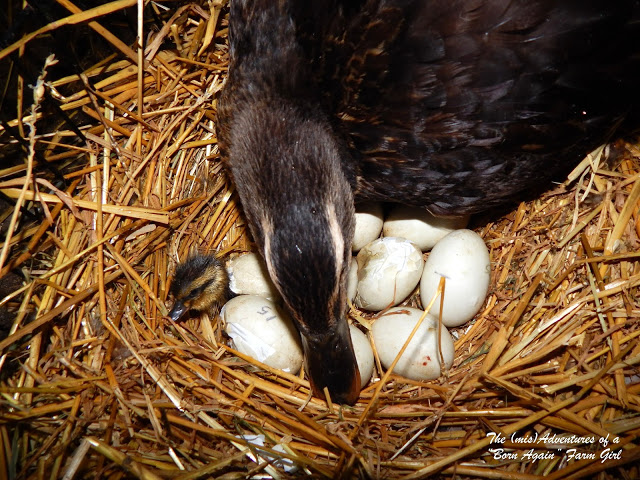 Over the next 36 hours, Betty and I managed to birth 10 beautiful baby ducklings. The cuteness was overwhelming and you could see her beaming with pride. Our male duck, Mr Bill, stood guard like any good but worried daddy would, just outside of Betty’s maternity pen. I will give Mr Bill a lot of credit on his role as a mate and father. He spent many hours of the day sitting just outside of Betty’s maternity pen keeping her company through her broodiness. 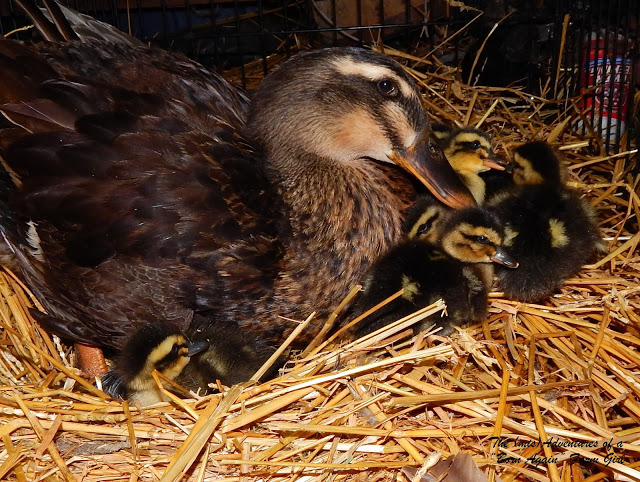 While sitting on a nest for 28 days, Betty left just twice a day to eat and drink. In the last couple days of her “pregnancy”, she didn’t leave the nest once! I was relieved when she finally began eating again after the eggs all hatched! Of course being a new mommy, she needed breakfast in bed! And the first ducklings that hatched were already starting to take sips of water.

Within a short period of time, Mr Bill led the charge on their first visit to the outside world. It was good to see Betty finally take a bath (cause she REALLY was starting to stink!) and how attentive and gentle Bill was with his little ones. 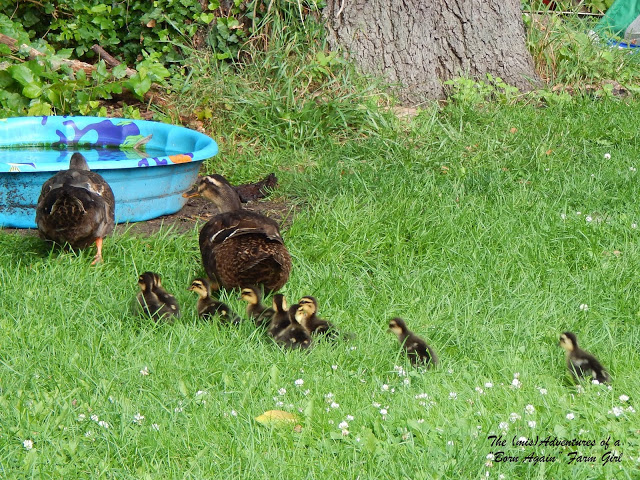 The following day, we put in a little ramp so the ducklings could get in the pool too. We placed a few larger rocks in the pool to give them a place to rest if they got tired and to help them get out when they were done. They needed no help getting out! They are like little rockets, launching themselves over the side! 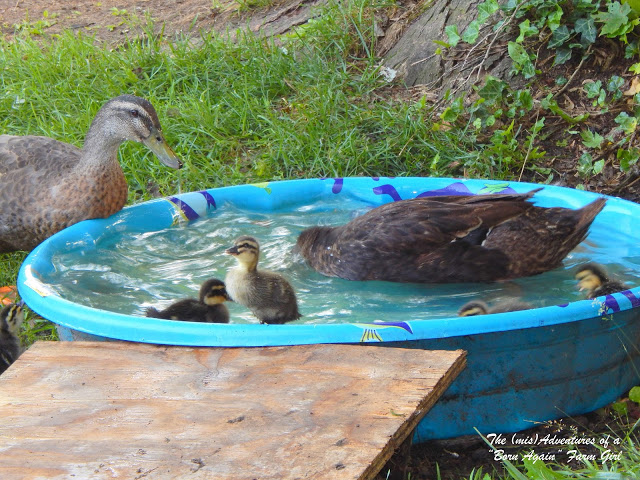 A few of the duckling really love the pool, even when Betty is making all sorts of wave action. I think these little dare devils are going to need to be watched! One has already started darting UNDER water. It is crazy to see something just a few days old shoot under the water like a torpedo!

Many people were concerned how Mr Bill would act around the duckling, even warning us he might attack and kill them, but that has not been the case. He is an amazing and very caring father. He is super gentle with them and is always in attendance. I think he is a little proud of what he “did.” 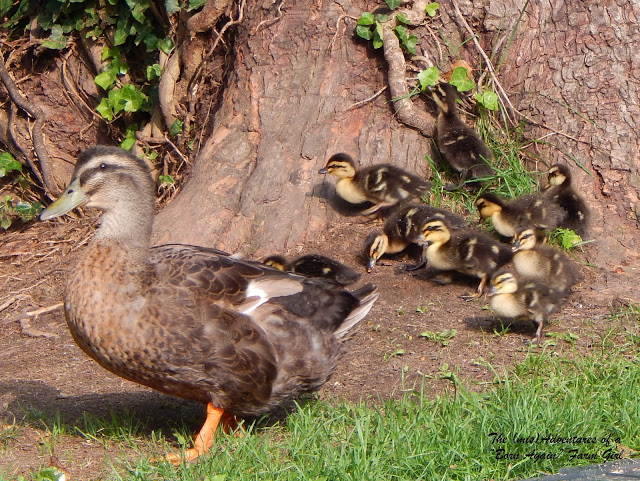 Unfortunately and sadly, three days after they hatched, one duckling disappeared. I have no idea what happened…. hawk, stray cat…… just gone. I’m not surprised, but I am disappointed. Betty now keeps a much tighter rein on the ducklings and does not let them wander as far away from her and Mr. Bill as she did the first couple days.

I think I am driving her and Mr. Bill a little nuts as I have been doing head counts ever few hours since the duckling disappeared. Every time I walk past the back window, I have to count them.  Every time I am in the yard, I have to count them. It’s a good thing I am, because this evening I counted to 8 five times before my ear caught the sound of the missing duckling peeping in the distance. I managed to locate it and return it to mom and dad. I don’t know why one of them didn’t go get it, but I guess protecting the many, outweighs the need of the one. 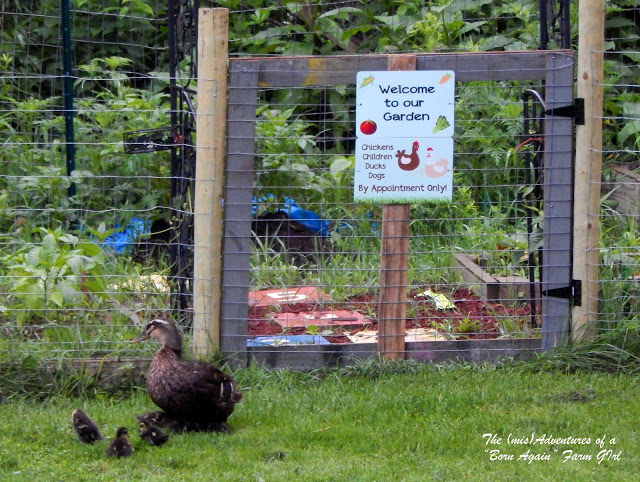 Having never allowed any of our poultry to hatch their own before, this has been such an adventure. I still get all giggly and go “awwww” when I look out the window and see Betty, Bill and their little brood of ducklings wandering the yard! It has been an a amazing journey, that is far from over…. Now to watch these cuties grow up!

29 thoughts on “We have Babies on Board *Warning* Cuteness overload!!”