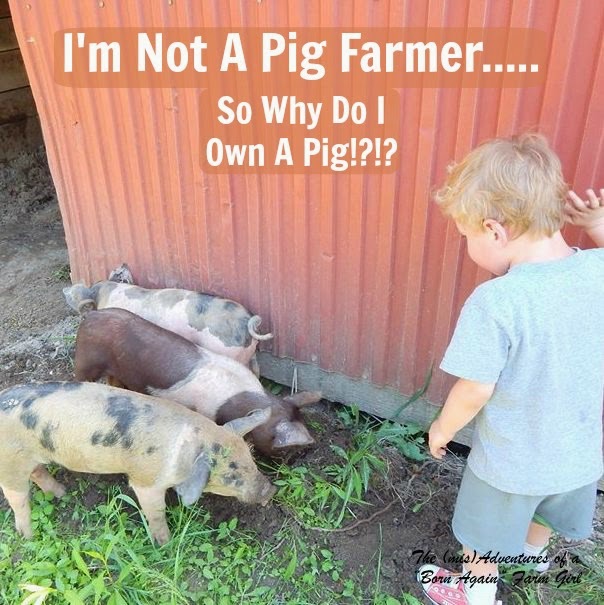 One word…. BACON. That is what got us into this terrible mess, bacon. How can bacon cause so much trouble? Oh my friends, do I have a tale to tell! It started out as a happy tale….. But then….

You see, last year, we bought a half of a pig from a friend who raised some pigs. We were delighted with the meat. Better then store bought, that’s for sure! We made our own bacon and even hung a salt cured ham. But all to fast, our pork was gone. Sadness descended upon our home. We did managed to find a wonderful pig farmer who sold us just the belly so we could make more bacon. There is nothing like homemade butcher block (thick) bacon. *drool* And just like before, it was gone all too fast. Again there was sadness.

That is when we got the hair brained idea to get our own pig! One small problem, we can’t have a pig where we currently live, so Oreo (our pig) went off to live with our friends (and their pigs) a few miles away. You can read all about that exciting day in my post “Bringing Home The (future) Bacon.” Over the summer I came to a realization…. Like ourselves, our friends aren’t pig farmers. All of our pigs were healthy and growing, but not gaining weight like we had hoped.

I contacted my pig farmer friend (who had sold us our little starter pig) and got a few pointers, but the pigs just wouldn’t pack on the weight. Yes, we wormed them…. they were just not fat, lazy pigs. And the goal of sending all the pigs to the butcher in the fall, well that idea was shot. There wasn’t enough meat on those pigs to feed anyone! And again we were sad for the bacon well had run dry.

And then to add insult to injury…….  One day I got a phone call from our friend stating she was at work and had received a call from her neighbor, our pigs were LOOSE. She knew I was closer and begged me to go stop them. Sadly, my truck had broke down a few days earlier and even though I was closer, there was nothing I could do until hubby got home from work. So all of the pigs took off. Yes folks, our bacon ran away!

You would not believe how far a pig can roam in a couple hours. They were around 2 miles away when we finally located them. Thankfully, a nice gentleman, who almost hit them on the dirt road, had his kids help him corner them in a pen on his property till word spread there were these non pig farmers looking for their pigs. We got a trailer and we all headed over to retrieve out pigs. We grabbed, pushed, pulled, and dragged those rotten pigs onto the trailer. We brought them back “home” and secured their pen. When we put them back in, they acted as if nothing had happened. Rotten pigs……

Fall has come and gone, and those rotten, skinny pigs continue to eat, sleep and make messes. We are hoping by spring they will have put on weight and they will finally be ready for the butcher. Oh who are we kidding, I don’t care what our pig weighs in the spring…. and I know my friend…. well she has developed a pig hatred too! Come spring we are makin bacon…… no matter how small that bacon will be.

I have come to the realization, I am NOT a pig farmer…… so why do I own a pig? One word folks….. BACON!