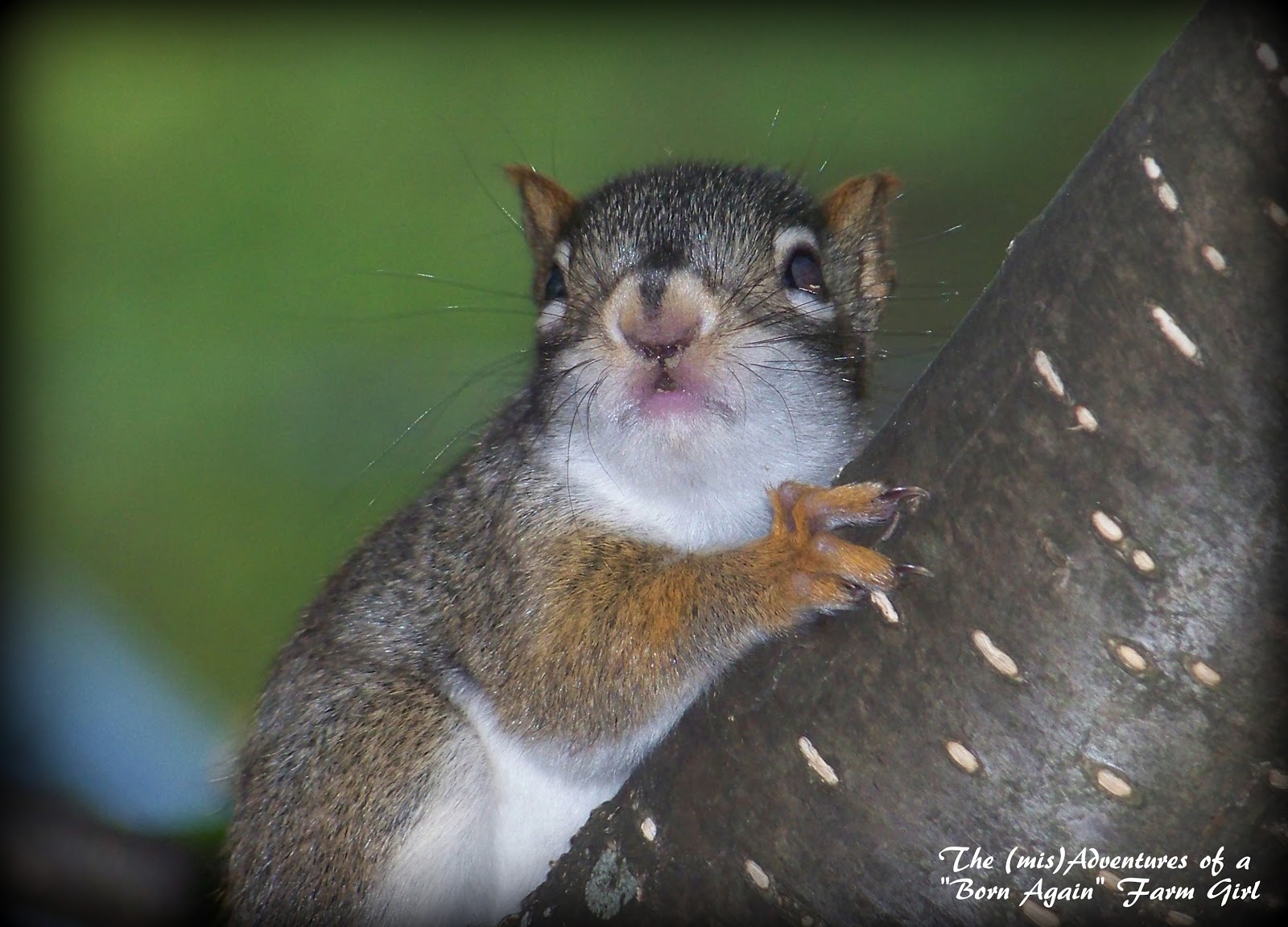 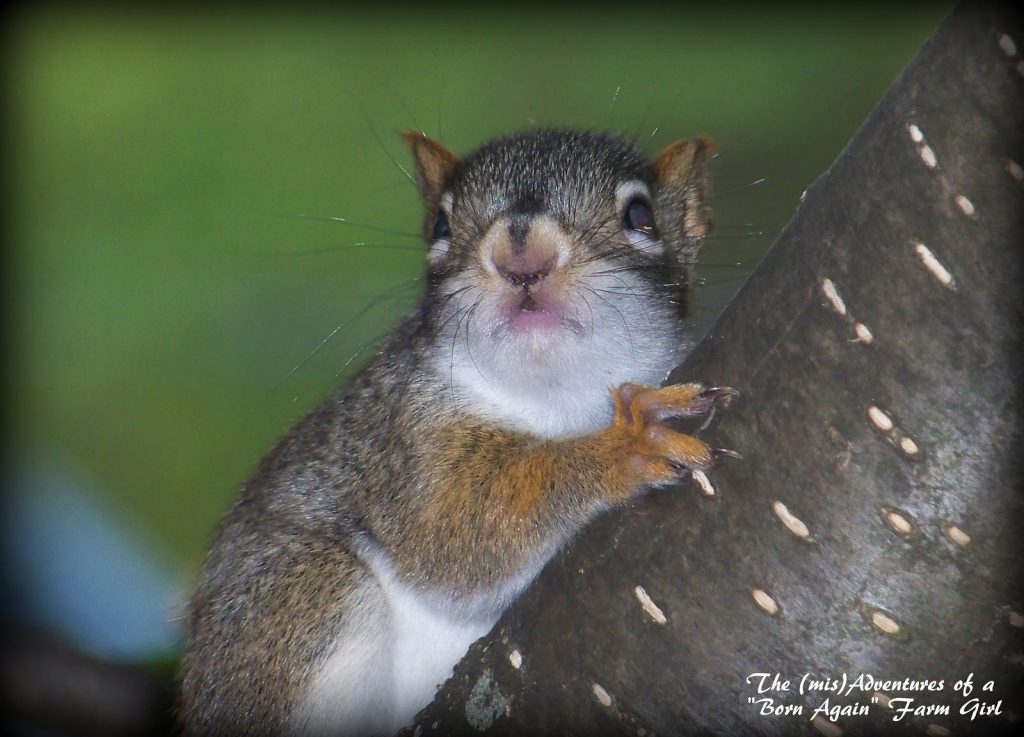 “Mom, mom, mom….. come see what dad and I found, come quick!” Those were the words that brought a little squirrel into our lives. He had been tangle and stuck in the ivy growing on the old maple in our backyard, for how long we did not now, be now he was free. We marveled at how beautiful and adorable this little friend was and we did what any responsible person would, we placed him on a branch and let him go.

But this little red squirrel, who was only around 42 days old, did not want to be on that branch! He scampered down the tree and up my husband’s leg! Obviously he knew who his rescuer had been! Again we put him on a branch….. Down he scampered and this time up my oldest son’s leg! Of course this prompted the “can we keep him” question from my nature and animal loving child. 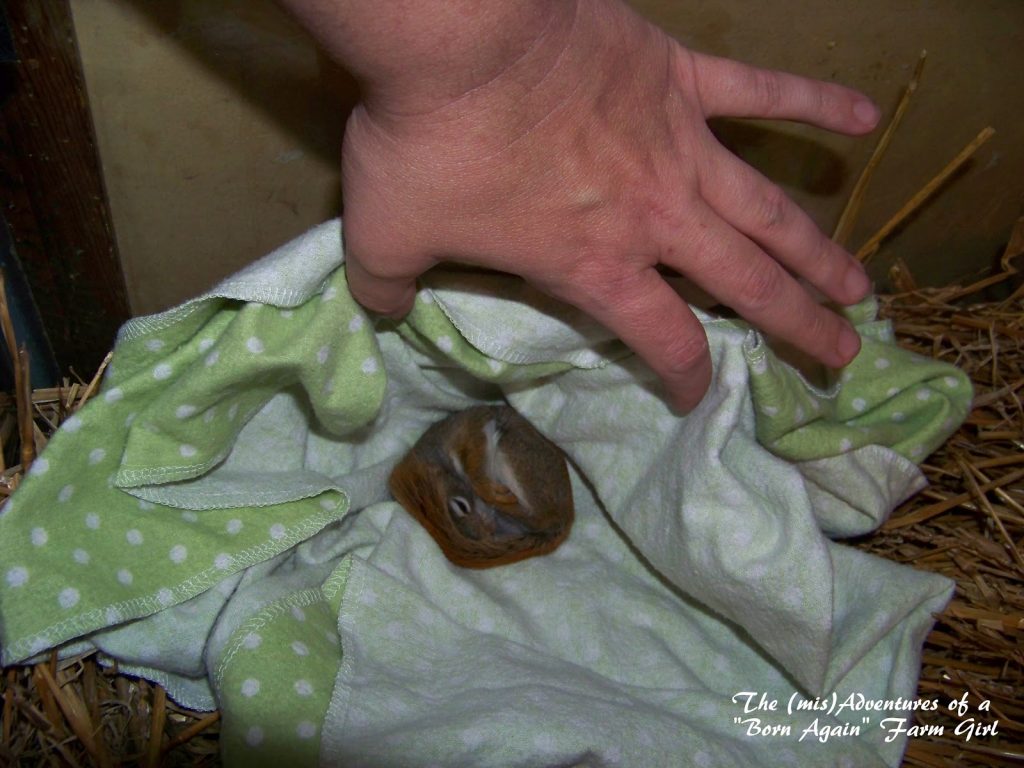 Wild animals do not make good pets. This is something I have always believed and try to instill in my son. No, we were not keeping this squirrel as a pet. I picked up the little squirrel who was now hopping around the yard lost and confused to check him over. He appeared to be physical fine on the outside but thin. As I explained again, this was not a pet, the little squirrel fell asleep in my hand. Well poo, what was I to do? It was obvious the squirrel was exhausted and I caved a little.

As my hubby put together a makeshift pen, my oldest and I sat on the couch marveling at this amazing little creature, with it’s tufted ears and little black strip on its nose. That is when my son (who loves the tale of Peter Rabbit) named the squirrel, Nicky Nuttkin. Oh no, I knew my son had fallen in love. I told him Nicky could stay till he was back on his paws but that he was NOT a pet. Everyone agreed to that fact.

That night I did manage to get Nicky to drink a bit and then he curled up in a little ball in the blanket we had given him and quickly fell back to sleep. Being brought up around animals I knew this whole adventure was a long shot from the start and the out come most likely would not be a happy ending, but I was willing to give it my best try. I knew this baby needed heat, hydration and nourishment and even then it was a gamble if he would make it. 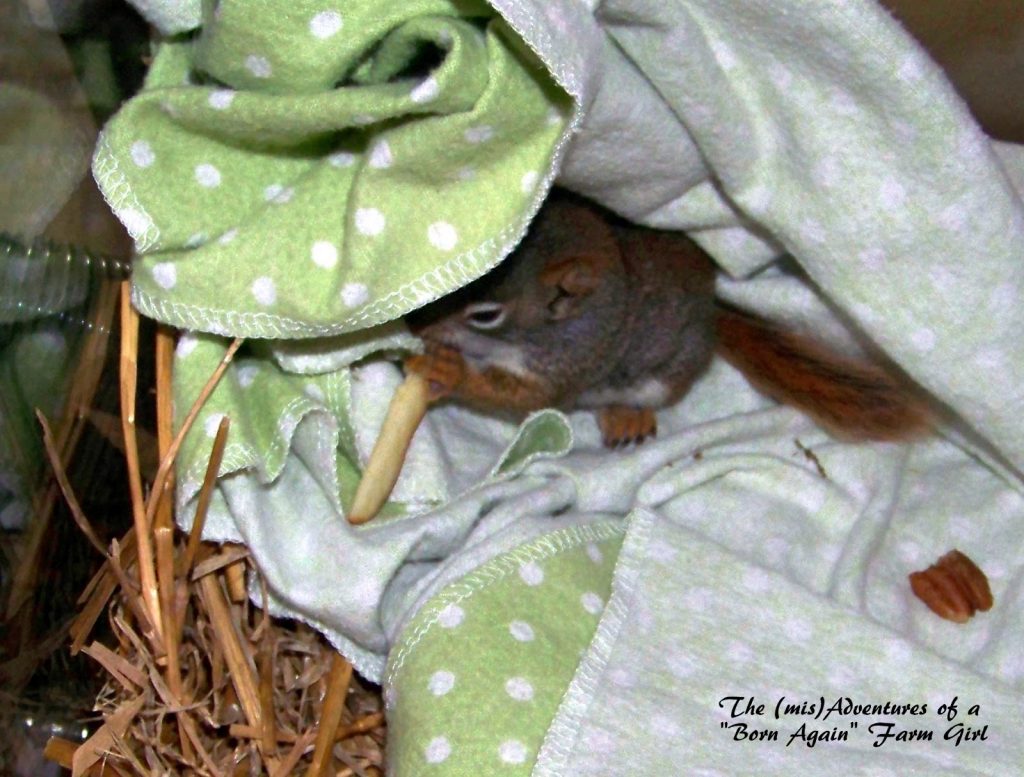 The next morning their was much joy as little Nicky had made it through the night!! Not only that, he was eating a little and drinking, which were both good signs. My son begged throughout the day to hold Nicky and watch cartoons. I explained to him Nicky was still a baby and babies, like his little brother, need lots of rest. We watched Nicky sleep, curling and uncurling, trying to get the perfect position. We watched him all day….. And I noticed, Nicky was going down hill. We had done all we could, followed all the advice, but Nicky stopped eating and just lay there. And that is when I had to break the news to my son, that his new best friend, most likely would not see the sunrise tomorrow.

My son wept. He did not cry like when you stub your toe or when you are told no about having a second ice cream…… he wept. My heart broke for him as I knew the pain he was feeling. This was not the first death he had dealt with, but he always took each time as if it were the first. My husband filled a zip lock bag with warm water as a make shift heat source and we laid Nicky on it and took him outside so that he could hear the birds sing and smell the world he knew one last time. We sat in the grass with tears running down out faces because there is nothing more we could do, little Nicky’s body was just too tired.

Now this is one of those times where it really sucks to be a mom because my son asked me to fix the squirrel. He begged me to make it live. There was nothing more for us to do, but as any parent would I “tried again” this time with a little sugar water dripped into Nicky’s mouth. I knew it wouldn’t help, but my son desperately needed me to try, because his heart was not ready to say goodbye and I understood that. 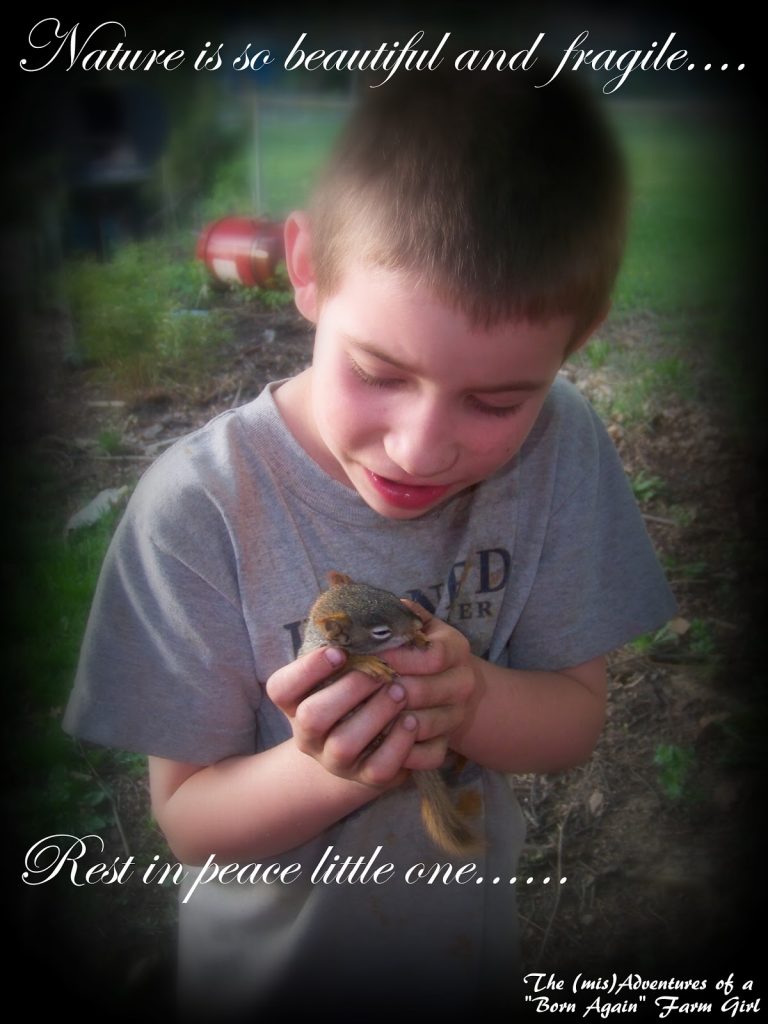 In just 24 hours this little squirrel had come into our live and brought us joy and now it was time for him to go. Nature is like that sometimes……… My son cried as he held Nicky in a blanket wanting to be there for his little friend till the end. I told him he needed to let Nicky know how much he loved him and that it was okay for him to go. My son tried but his heart wanted Nicky to live and so when Nicky stopped breathing my son begged me to do something….. so I preformed CPR on a squirrel. Why!?!?! Because my son needed me to. And yes, it worked, Nicky began to breath again. I explained to my son, that Nicky was ready and that he needed to come to peace with this because it was not fair for me to bring Nicky back again, we had to let him go, no matter how bad it hurt. Nicky stopped breathing a few times before finally passing. It was hard for my son because he wanted so bad for Nicky to live and with each breath Nicky took, my son still had hope. Hope is an amazing thing and such a painful thing at times.

My son held the wee squirrel till the very end and I know in my heart little Nicky Nuttkin knew he was loved and he was not alone as he crossed that rainbow bridge. My son blamed himself for Nicky’s death. He said if he had just not gotten him out of the ivy, maybe he would have lived. So as any good parent would, I had to sit down and explain life to my son…. That Nicky would have died the night before if he had not tried to help and that the squirrel would have died alone, cold, and scared. It is hard to make a child understand sometimes that there was really never any hope, but that in life you try anyway, no matter what.

As I prepared a coffin for Nicky my son brought me a “letter” he wanted to place with Nicky that simply said “Dear Nicky, I love you.” And you know what I told him? That Nicky already new that because of his actions. You know it is hard sometimes to be a parent. Even more so when things don’t go “right.” But I will always be amazed by the compassion my son has and love he gives so freely to the world. Our hearts may be hurting, but this has been one of those moments that make life what it is, in it’s rawest form. It makes you take account of your actions, their impact, review your choices and accept what can not be avoided or changed. We didn’t have to open out hearts and home to that little squirrel but all involved are better for the experience regardless of the outcome.

5 thoughts on “The tale of Nicky Nuttkin”