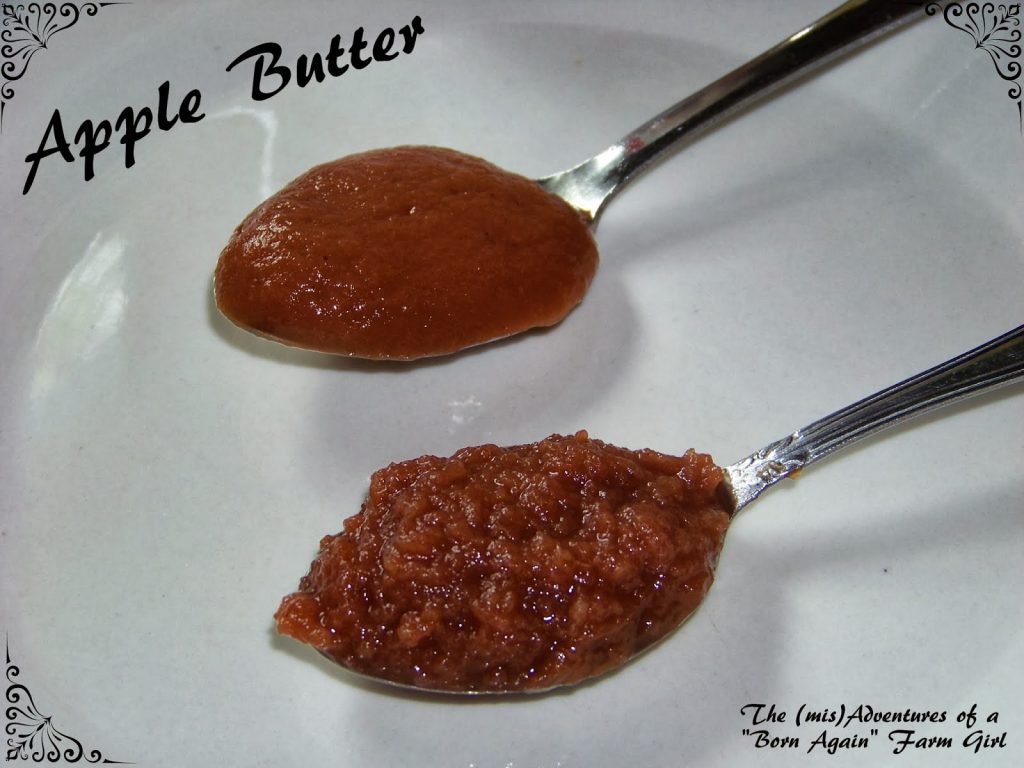 My hubby has always had a “thing” for apple butter. We even went to a festival once and got to help make some. They were doing it the old fashion way in a big… no make that huge pot over a wood fire. Well I don’t have a pot that big, nor the supply of apples, but I did want to at least try to make some for my hubby at home. After much research of recipes and ways to go about it, I loaded my family up to hit the local u-pick orchard.

Ah yes, the family outing to pick apples. The Norman Rockwell moment we all dream of. Happy children picking along side parents, enjoying a beautiful fall day. Yeah right!!! Have you met my family!?!?! What started off well, turned into the apple death march from hell. Near the end, hubby and I were just trying to finish filling the bag so we could get the heck out of Dodge. The littlest country kid had snarffed way too many apples off the ground and the oldest country kid was tired of walking and complaining about it loudly…. Ahh but you can make a picture look like it was the best day ever! Norman and his pictures. 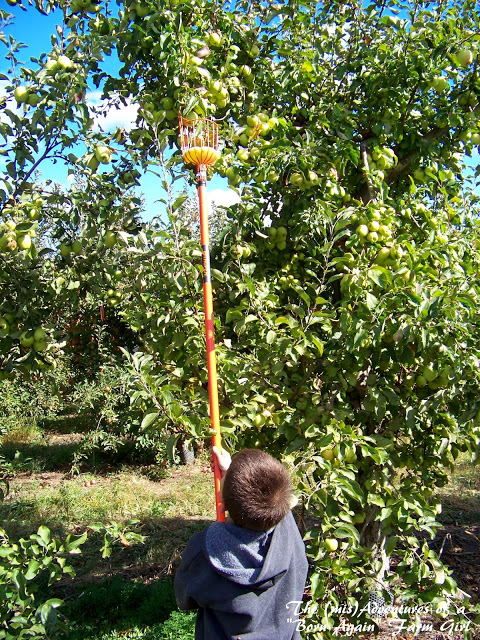 With apples on hand and the children off doing other things it was time to get to work on that apple butter. I pulled out the apple peeler/corer and set to work. I used a blend of apples, Jonagold, Golden Delicious, and Empire, to make my apple butter. You can use which ever variety you like, just remember, the apples are cooking down and concentrating, so if you use a bitter or tart apple… that taste will only get stronger. Once the apples were ready, it was into the crock pot they went.

How many apples did I use? Well they were of varying sizes so I just put enough in to fill the crock pot to the top. That will vary depending on what size crock pot you use. I also added in the following: 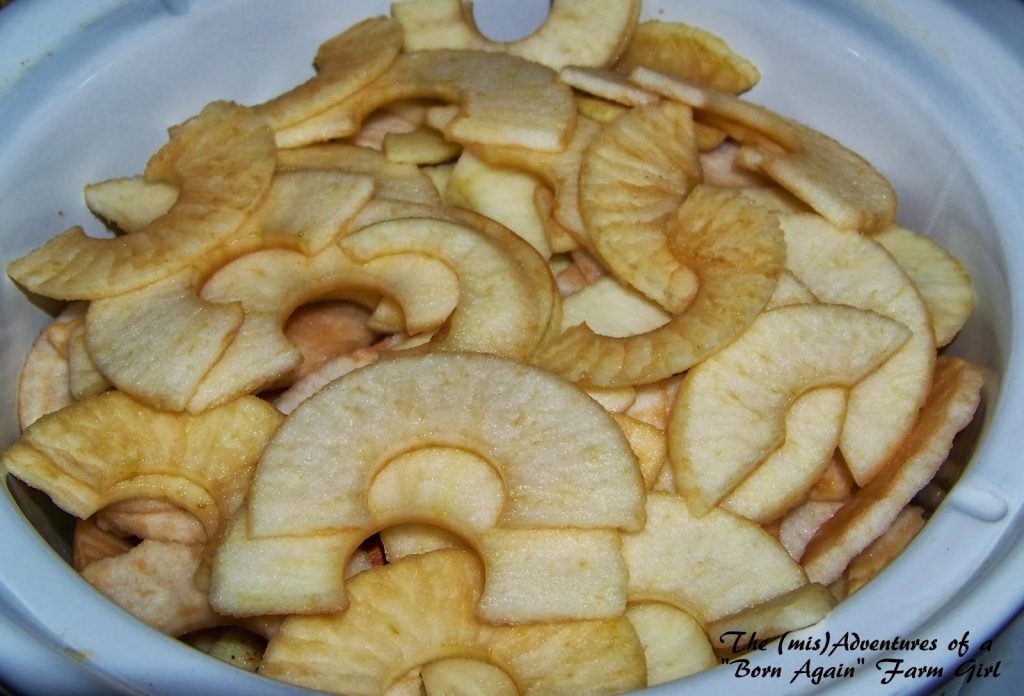 I put the crock pot on low and let it go for about 8 hours. By that time the apples had reduced down to half, so I added in enough new apples to get the pot back up to full. I kept the crock pot on low for an addition 16 hrs. Every once in a while I would stir the pot, but for the most part, it is a set it and forget it kind of project. At the 24 hour mark, I took the lid off the crock pot and bumped the temp to high so the majority of the remaining moisture would evaporate off.  My hubby likes his apple butter thick… like a spread. This last step took about 2-3 hours with a lot more attention and stirring. Once that was done we let the apple butter cool off. At this point I removed the cinnamon sticks and then ran it through a blender (cause hubby likes his apple butter SMOOTH.) The first photo of the spoons shows before blender and after. 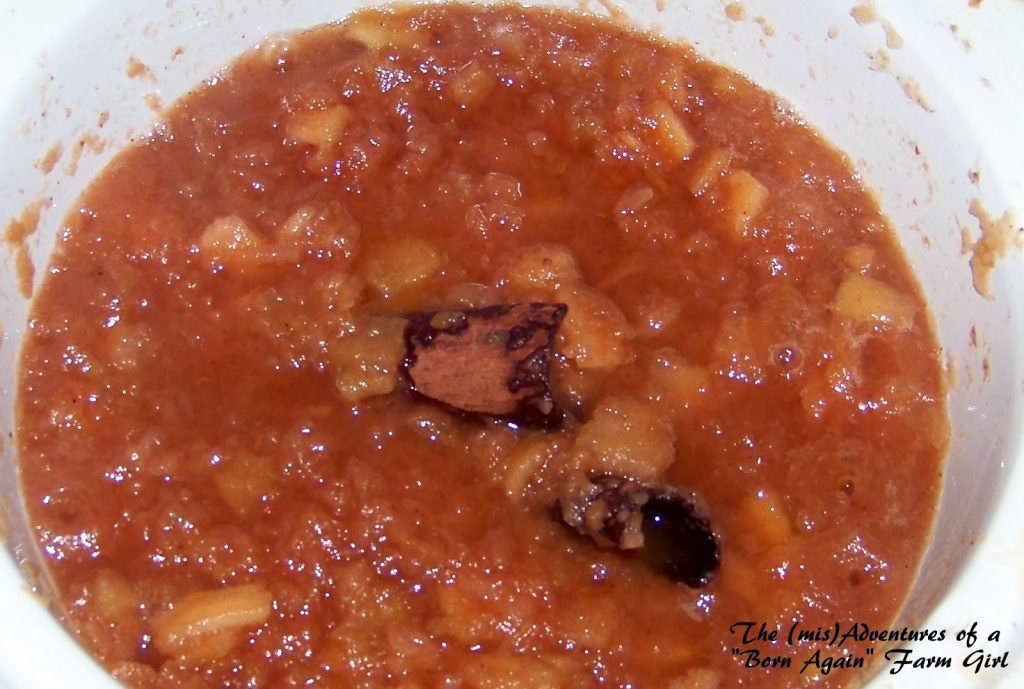 Ya know, other then the peeling/coring thing… this is really a breeze to make. I mean it looks time consuming but you really don’t have to watch it the whole time…. and the added bonus is your house will smell amazingly yummy. And at least for me, bonus points with the hubby! Yeah I made him apple butter, that’s right, this girl right here!

And heck if I can pull this little cooking project off, so can you!!! So why not give it a go, you might surprise not only yourself, but your taste buds too!