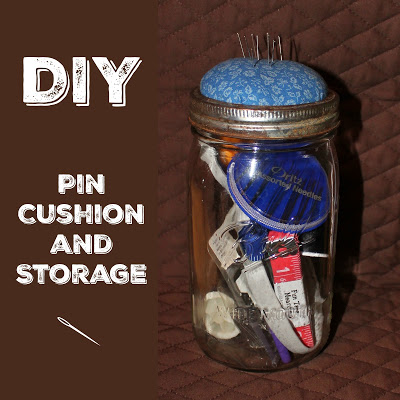 Ever since my hubby bought me a new sewing machine, I have been sewing like a mad woman. You see a few years back, my rotten country kids messed with my old one and it was rendered basically useless, except for making a straight simple stitch. But this new sewing machine… It even threads its own needle! Seriously! I had no idea this advancement in sewing had been made in the last decade! Let’s just say, my sewing juju is back.

In the month since I got the new machine, I have been sewing Halloween costumes, blankets, pillow cases, and curtains. Watch out world, I am on fire! But I have also noticed a few “issues” developing around my new found love of creating. First off, my stuff keeps disappearing. My tape measure has wandered off, my thread takes vacations to parts unknown… Yes, my sticky fingered offspring are meddling in my sewing addiction again.

On top of the missing sewing items, I have *hangs head in shame* been dropping needles and pins from time to time. Luckily, no one has found them with their feet. I had to get these issues under control, so I made my own pin cushion and storage out of an old canning jar. I used an old ring and lid, because we do can our own food, and I didn’t want to waste new ones. I also think it gave my “kit” an antiqued look. The best part is, it cost me nothing to make and was super easy to pull off in mere minutes!

I started out by cutting a piece of scrap fabric in a circle slightly bigger then the canning jar lid. It wasn’t perfectly round, but it didn’t really matter. I then did a simple hand stick around the edge, NOT tying it off at either end, this way I could draw it up. I learned quickly after my first attempt at trying to “finish” the lid that single strand thread was NOT the way to go. Make sure you use a double thread. I then grabbed some poly fill to put between the fabric and the lid for my cushion.

Once I had the poly fill in place and the lid held over it, I had the oldest country kid help me out by pulling the threads so that the fabric bunched up around the lid. He pulled a little too hard with the single thread, which is why I went back and redid the project with a double thread. It was much sturdier and he was not able to pop the thread while pulling. Once he had tied a few knots, I used thread to sew across the bottom of the lid. This extra stitch kept the fabric from shifting.

I than used a hot glue gun to secure a smaller canning lid to the bottom of my pin cushion by running a bead of hot glue around the edge of the fabric. While this step isn’t really necessary, it did make the project look clean and finished. This project would make a wonderful gift, and if you were to give it to someone, you would want it to look its best, so the extra lid does that. 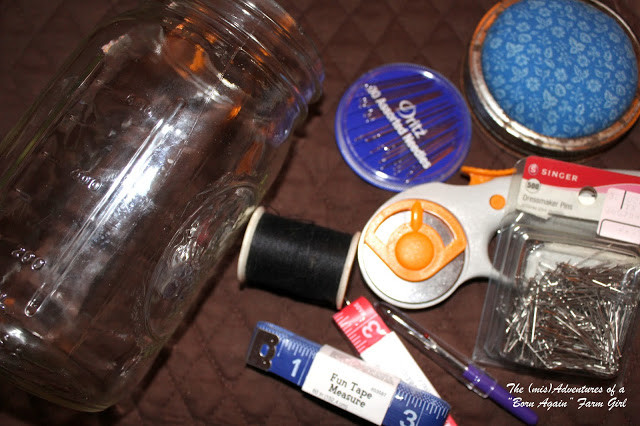 I used a wide mouth quart jar because I had a lot of items I wanted to store in my jar. I got everything in this photo and then some in my jar! Now I have a central location for my sewing stuff that I can easily move around when I am working on projects and also hide from my kids when I am done! I finally found a way to keep my items from disappearing and to keep my needles and pins where they should be, instead of on the floor or in someone’s foot! 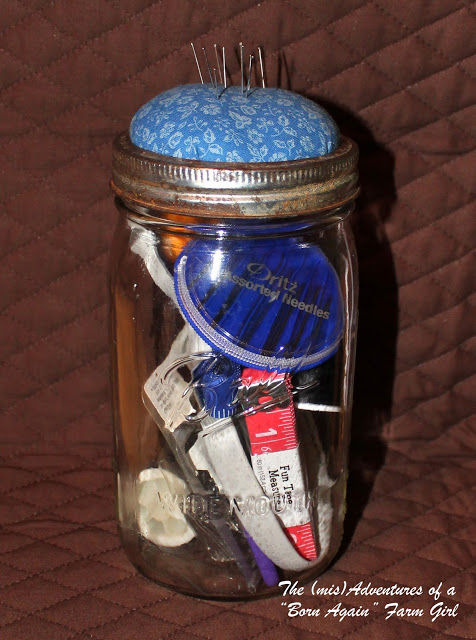 I think my little kit turned out just the way I needed it. I can also see the potential for some gifts in the future too! Using a smaller size jar and filling it with a few simple items, this would make a great starter sewing kit. Hmmm….. I think I know what each of the country kids’ are getting for Christmas! They can fix their own stuffed animals from now on. *wink*