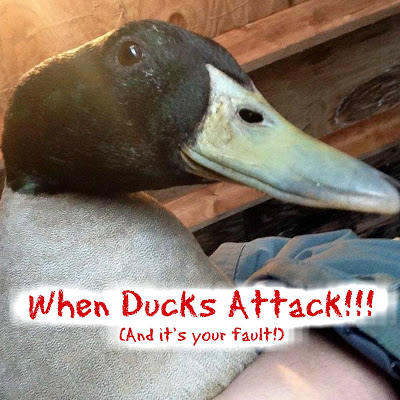 Ducks are not like other “pets.” They don’t jump up and lick your face like a dog that is happy to see you. They don’t snuggle on the couch next to you like your favorite cat. Now don’t get me wrong, they can be “friendly” in their own way. Ours know their names and come when called. The enjoy hanging out with you, if you have some mealworms.

But, from my experience, ducks are not huggers. They don’t liked to be picked up, even though we have raised all but one from a baby. And they most certainly do not like being chased. EVER. Not even if the person doing the chasing thinks they are playing a game that everyone involved is enjoying. Because trust me, Mr. Bill, our male duck, does NOT enjoy the chase game that the littlest country kid has recently started to play.

When spring sprang this year, the littlest country kid could not wait to get outside. And for some unknown reason, this year he decided Mr. Bill was going to be his buddy. He should have asked Mr. Bill instead of assuming, but hey, when you are four, if that duck is your friend, he is, whether he wants to be or not. It all started with a simple misunderstanding, one I actually had as a child too, that if you chase an animal and you turn around and run away and it follows, well you two are playing together! For me, it was a snake *smacks forehead* and for the littlest country kid, it is Mr. Bill. 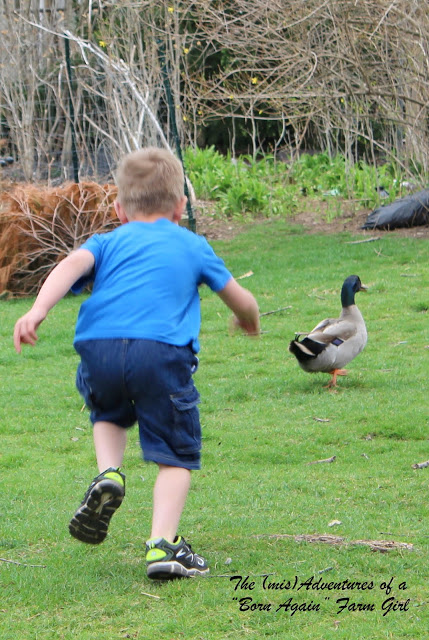 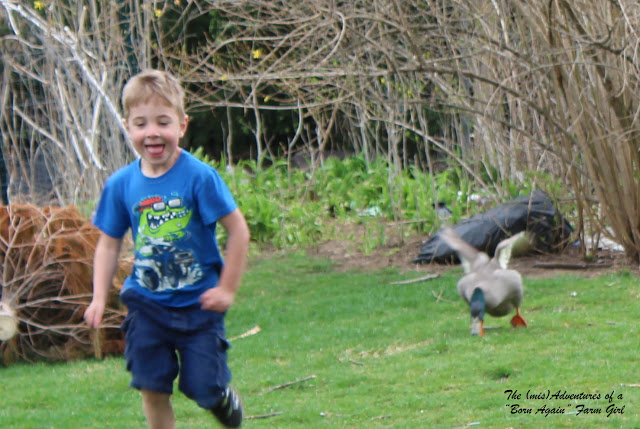 I tried to be a parent, I did, I swear! I told the littlest country kid a million times to leave the ducks alone, stop chasing them, that they did NOT like the “game.” But would he listen? Of course not, because when you’re four you know everything, right? So after talking myself blue in the face about proper duck etiquette, I grabbed my camera, sat back (while still warning him) and prepared for the final showdown, because I knew it was coming. 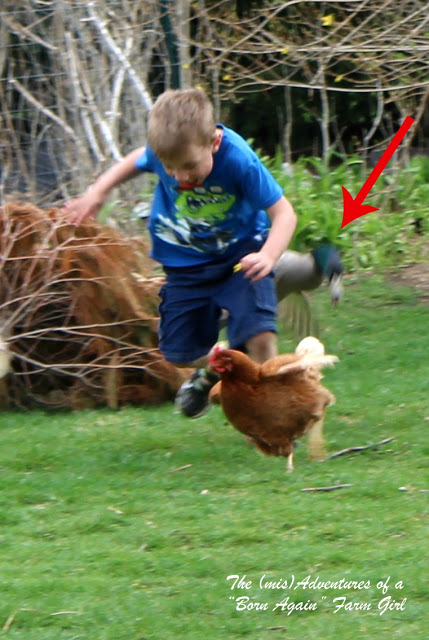 Now to Mr. Bill’s credit again, he didn’t attack the littlest country kid once he had him down, he just stood there staring at him. I imagine if I could talk duck it went a little something like this…… “Okay kid, enough is enough!” But the littlest country kid doesn’t speak duck, nor listen to his mama, or take a hint from an animal who has just knocked him down that maybe, just maybe, he should stop chasing the ducks. 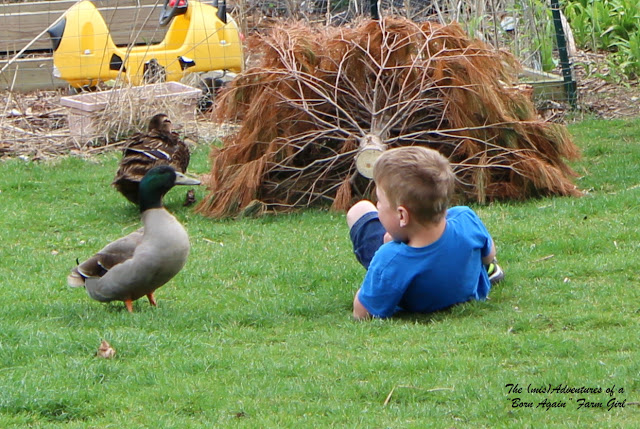 To drive his point home, Mr. Bill did a big wing flap, and
aka “I’m the man” behavior. But alas, that too was lost on the littlest country
kid. 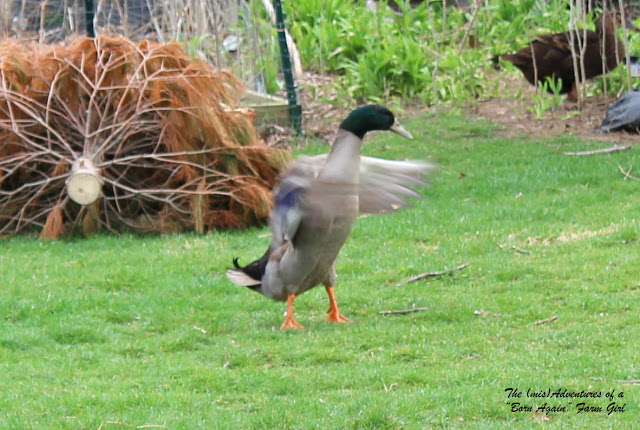 By this point, when the chasing began AGAIN, I kind of felt
like it was pointless to keep telling him to stop. But being the good mom and
animal keeper I am, I continued to try to stop the littlest country kid. I did
however start to actually root for Mr. Bill to totally take the littlest
country kid down and put him in his place. When talking, time outs, not being
allowed outback to play and everything else I tried had failed, I was hoping
Mr. Bill would drive home the point that you DON’T CHASE DUCKS. And ya know
what? Mr. Bill finally snapped, and the fear that came over the littlest
country kids face as he ran for his life……. Priceless! 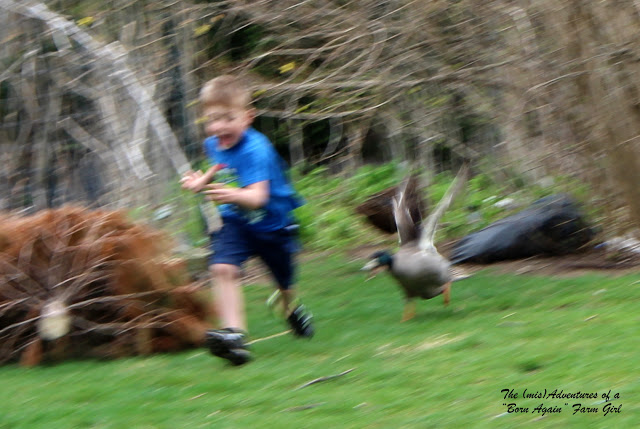 Don’t get me wrong, I would save the littlest country kid
should at any time Mr. Bill took it too far, but it was also funnier than heck
to watch. Mr. Bill knocked him down on all fours, jumped on his back, ran up to
his head and started biting and pulling his hair, before dismounting (and
scratching) on his arm. Yup folks, a full can of duck whoop ass was opened!!!! 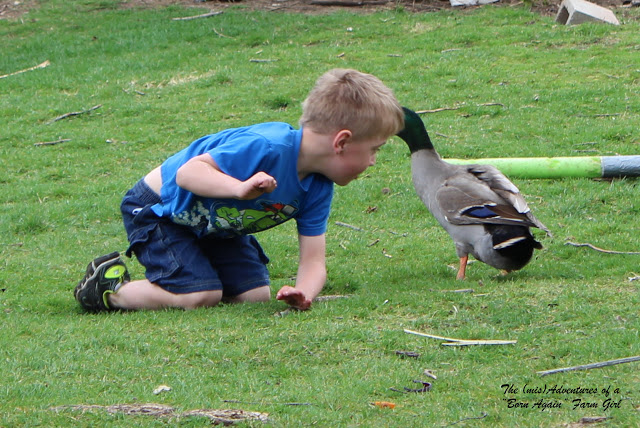 The littlest country kid had a few scratches on his arm, and a nice duck bite on the back of his leg when it was all over. Yes, ducks bite. They have serrated bills so when they bite, they wiggle their bill back and forth and it can leave a nasty mark. 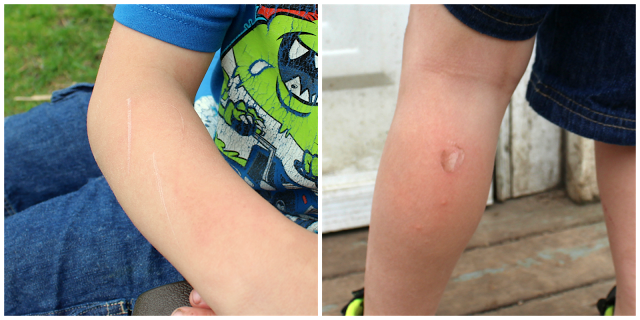 I honestly believe the littlest country kid was more emotionally hurt then physically hurt. I mean in his little mind his best friend had just beat him up. He was so deeply sad. And I through we (Mr. Bill and I) had finally gotten through to him that ducks don’t like to be chased. 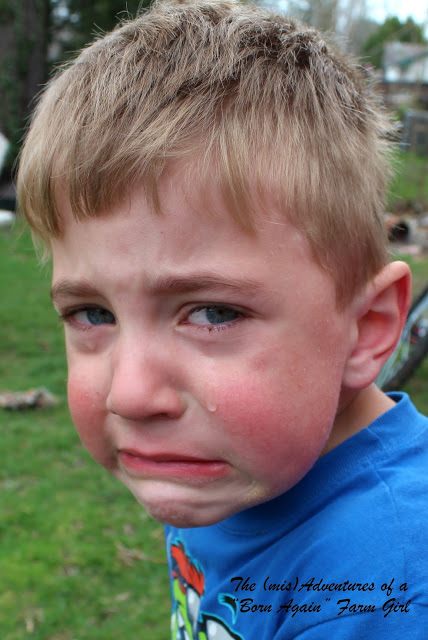 I felt so bad for him as he sat there crying. But, it was a realization
that he needed to come to. Sometimes in life it takes a hard lesson to learn an
important and valuable piece of information. And what had we learned? Ducks don’t
like to be chased. He had no one to blame but himself for what happened. Mr.
Bill felt threatened, was protecting his females, and just being a duck. 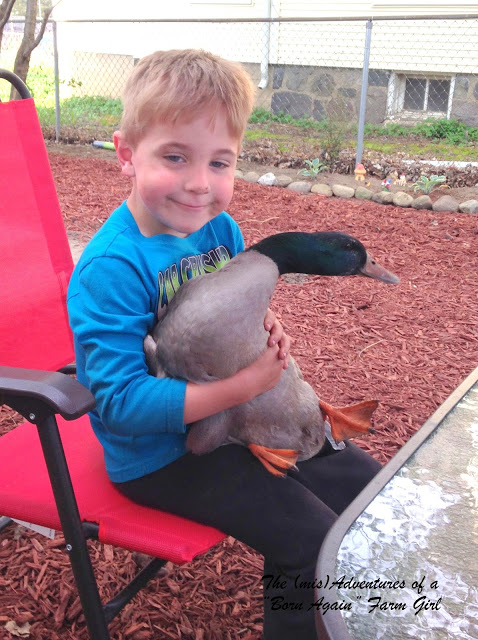 Poor, poor Mr. Bill. It has even gone so far as him having to take rides with the littlest country kid. I just don’t get these two. One minute it is a knock down, drag out fight, the next they are headed to the store…… 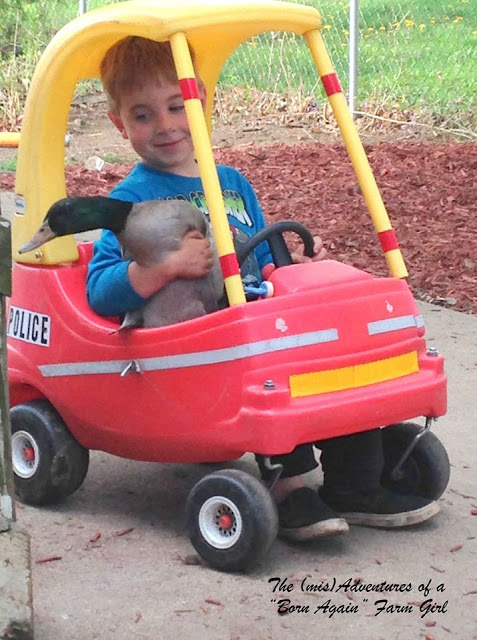 While Mr. Bill and the littlest country kid might be working things out, Mr. Bill is taking his frustrations out on everyone else now too. He has gone after the oldest country kid and even myself. Of course I don’t play games and told Mr. Bill if he ever tries to bite my leg again when my back is turned, I will just have to start hugging him every morning before I let him out for the day. What? It seems to be working for the littlest country kid! Maybe Mr. Bill would like a ride in my pickup truck…. Hmmm… Ducky road trip!!!

28 thoughts on “When Ducks Attack (And it’s your fault)”