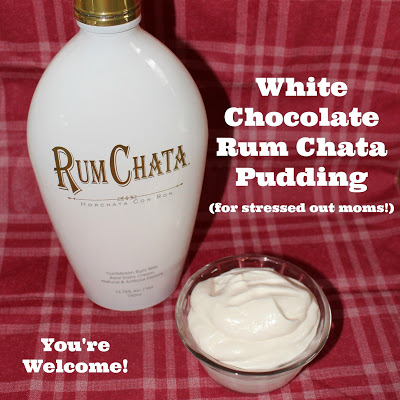 I am not a big drinker by anyone’s standards. I maybe, MAYBE have a half dozen drinks a year. I am not a fan of beer, even though hubby brews his own, and I don’t care for a lot of liquors on their own. I also don’t care for mixed drinks where there is an over powering liquor taste. You know what I am talking about, when you drink, exhale and it burns. Yeah, not my cup of tea. However, over Christmas I had the chance to sample an adult pudding that not only tastes good, but goes down WAY to easy!

This simple to make adult dessert has only four ingredients, keeps well in the fridge, and can also be frozen to make adult popsicle. *high five* I know what I’m going to have to hide from the kids this summer. *wink* So grab your mixing bowl and a bottle of Rum Chata and let’s get to “work.” Oh who am I kidding, this is way too easy to make to be considered work.

The original recipe for this pudding calls for plan old chocolate pudding, but the white chocolate makes it taste even better, in my opinion. Start by mixing the contents from the box of pudding with the milk. Once the pudding is all dissolved, pour in the rum chata. Now here is the tricky part…. Okay there is no tricky part, unless you have already been taking sips from the rum chata bottle…. Fold in the whip cream. That’s it, you’re done. Now set that magic bowl of adult pudding in the fridge to set up.

What I truly love about this pudding is it goes down smooth, none of that burning in the throat or chest that other pudding “shots” give you. It is just enough alcohol to give you a nice “I don’t care what the kids are fighting about or who hit who” little buzz. Just send them ALL to their rooms!

Of course everyone’s alcohol tolerance is different. And while this stuff taste so good, you don’t want to be laying on the floor while the kids are running a muck, so pace yourself! You don’t want it sneaking up on you. *wink* Now excuse me while mommy has a snack. LOL