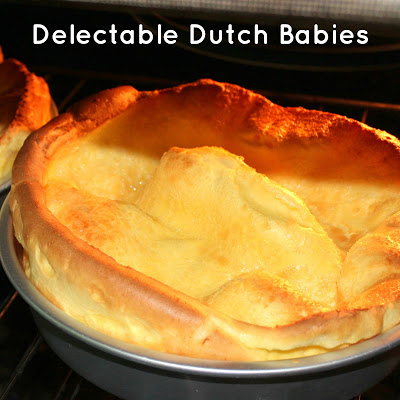 Before I met my hubby, I had never heard of a Dutch Baby. Having lived in Seattle, my hubby was well aquatinted with this dish.  What does Seattle have to do with anything? Well, the history of the Dutch Baby is that it first appeared in Seattle in the mid 1900’s at Manca’s Café.

The name Dutch Baby was said to have been given to this dish by the original restaurant’s owner’s daughter. Dutch babies are also know by the name German pancake, Bismarck, and Dutch puff. No matter what you call them, they are amazing!

But what is a Dutch baby? It is a delectable popover pancake. This breakfast delight is simple to make and amazing to consume. The Dutch Baby recipe works with simple ingredients and works on a simple parts system, for each egg, you add ¼ cup flour and ¼ cup milk.  You really cannot mess this recipe up! The more batter you need, you just keep adding the same amounts.

We use a 9” round cake pan to make ours, but cast iron works great too. We just don’t have enough cast iron pans to make enough Dutch Babies to feed everyone at the same time. Any metal pan would work. We have even made the in a 9”x13” pan and then just cut it up and serve. Whatever pan you use, you will want to start by setting your oven to 400 degrees and placing a lump of butter in the pan and placing it in the oven so the butter can melt. How much is a lump of butter? Enough so that when it melts, it coats the bottom of the pan. 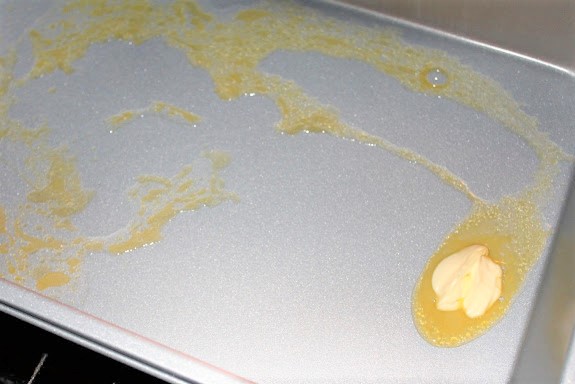 For a 9″x13″ pan you will need double the batter that you would use for the round cake pan. Yes, this uses a LOT of eggs, but it is so worth it. If you raise chickens, this is a delicious way to use up some eggs when you are being overrun with eggs in the summer.

Once the batter is mixed and the butter melted, simply pour the batter into the pan of your choice and bake for 20-25 minutes. The Dutch Babies will puff up as they cook. 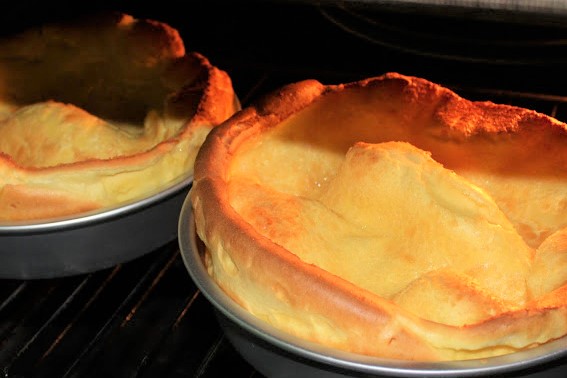 When you remove the Dutch Baby from the pan, it will deflate a bit, it is supposed to, don’t think you have done something wrong. Now comes the fun part, deciding what to put on your Dutch Baby! Traditionally a little butter, lemon juice and powdered sugar are used. Hubby loves them with bananas and honey. You cannot go wrong with fresh fruit. It’s your Dutch Baby, so be creative, and top it any way you like! I am toying with the idea of throwing some chopped chocolate into the batter next time or drizzling some chocolate on top. Chocolate and breakfast go together, right? 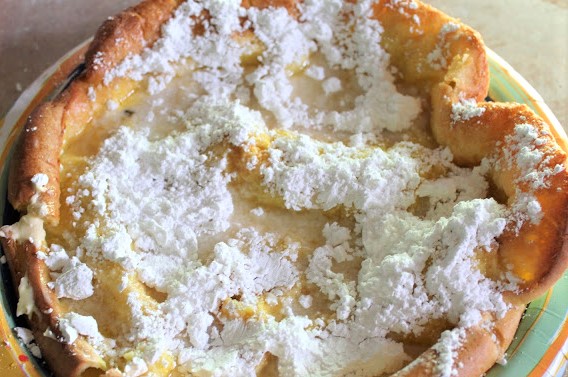 No matter how you top it, Dutch Babies are delectable!