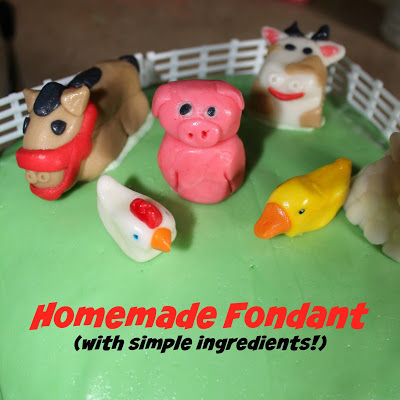 What?!?! Who did this child think I was, the Cake Boss or something? I mean I know how to bake my butt off but I have never made edible animals and the only way I could think of doing it was with fondant, which I had never made or worked with either. This fourth birthday cake just got a whole lot scarier.

Of course I looked online for fondant recipes, and I perused the baking aisles at my local craft stores. Two things came to mind as I did each of these…. First, wow there is a lot of weird crap in fondant! I didn’t have or couldn’t get my hands on the ingredients in time to pull this off. Second, I am not paying that much money for pre-made fondant in a box. *sigh* But I couldn’t let my little guys down. I am super mom in his eyes and I would like to retain that title a couple more years if possible. So what was I to do?

Start thinking like the baker I knew I was, that’s what! What made fondant, well, fondant? What gave it its properties? You know, like taste sweet, firm to work with, yet pliable to sculpt. And believe it or not, at least for this birthday, I have retained the title of super mom with my homemade fondant with simple ingredients.

When it comes to the amount of cornstarch, you kind of have to play with it. The cornstarch makes the fondant set up and gives it some firmness. If you use to much, the fondant will crack when you are working with it. Add a little in at a time when mixing the recipe.

Now I am not saying you need to be physically fit to make this, but it will require some arm action. My kick butt mixer tried its best and got everything mixed together rather well, but then it was time to turn the fondant out on the counter and kneed it like bread in order to make it nice and smooth, luckily, hubby was home, and I claimed I had other party preparations to get on, and could he please kneed for me. *wink* I wasn’t born yesterday!

Place the fondant in the fridge to set back up. Having never worked with fondant, I have no clue if “real” fondant needs to set up or not before you work with it, but the heat from your hands will cause this fondant to soften as you work with it.

Sculpting the farm animals was rather easy. I used gel food coloring and just worked it into the fondant to achieve the colors I wanted. Then it was just a matter of looking at pictures and attempting to copy them to the best of my ability. Like I said before, I am no Cake Boss, but I think I did a pretty darn good job for my first try at sculpting fondant! 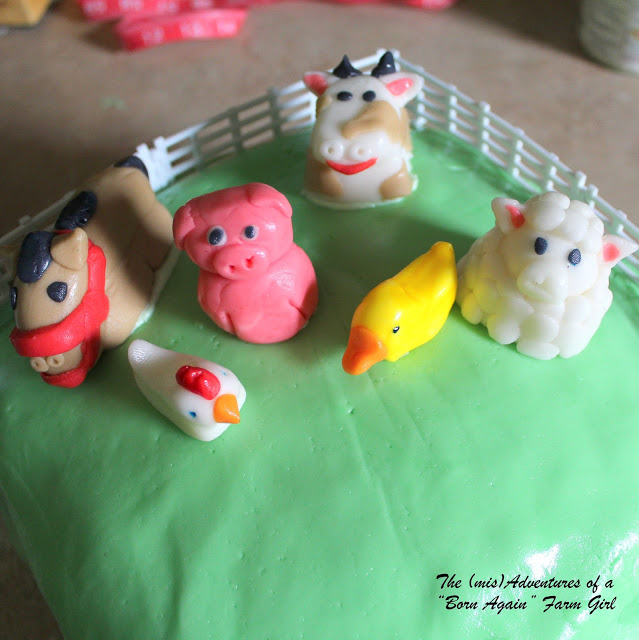 Making the animals reminded me of playing with Play-doh as a child. The heat from my hands made it easy to manipulate the fondant. It is hard to pick which animal was my favorite to make, but the pig and the sheep turned out pretty darn cute! I have a friend who is a pig farmer and after seeing the cake, she requested an all pig cake for her birthday.

Now rolling the fondant out was a much trickier task for me. It was crunch time with less than an hour till the party, and I was freaking out. I couldn’t get it rolled to the right size and kept re-rolling it, thus making it warmer and softer each time. After calming my nerves, I did get the cake covered in sections. I learned a great lesson, start earlier, and relax, it is cake making, not rocket science, it doesn’t have to be perfect. Even with my little imperfections, the look on the littlest country kid’s face as he stared at that cake in awe, made it all worthwhile!

This recipe makes a large amount of fondant. In fact, I had some left over on a cake that was two cakes high. If you are doing just a simple cake, you could probably cut the recipe in half. I had one party guest (an adult) who said she didn’t really care for fondant. But ya know what? She tried mine, because it was homemade, and she actually liked it! Homemade things are better than store bought, so take that you over priced prepackaged fondant!