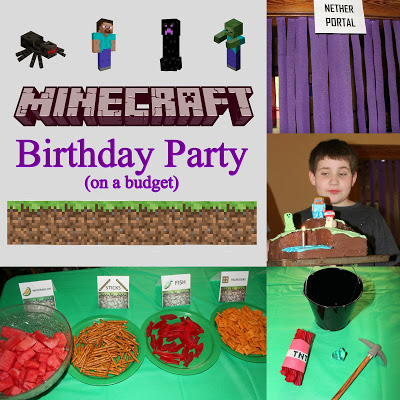 Recently the oldest country kid turned 10 years old. When I asked him what theme he wanted for his birthday, he had said Minecraft before I even finished asking. *smacks forehead* Ugh, that game he is always talking about and begging for screen time to play. I mean literally, if he isn’t playing it, he is talking about what he will build next or he is reading a book on how to build his next great project.

I guess I shouldn’t feel too bad as millions (yes, MILLIONS) of children across the world spend their days digging (mine) and building (craft) different kinds of 3D blocks.  This is a “sandbox game,” because players creates the game themselves by manipulating the world within it (like kids playing in the sand). Honestly I would have been happy not knowing any more than that, but alas, I had a party to plan.

So what does a mama do when she has never really given a small rodent’s posterior about something but is then charged with bringing it to life in her own home? Well I started watching him when he played, I looked through his Minecraft manuals, and I hit the internet for information and ideas.

We don’t have a lot of “extra income,” and I quickly learned Minecraft stuff is pricey!!! It was time for me to break out my super mama cape and get crafting. I’m still not sure what most of this stuff is or what it does, but it made him very happy, so I must have done something right! All his friends were impressed too, so it wasn’t just my kid sucking up to me! 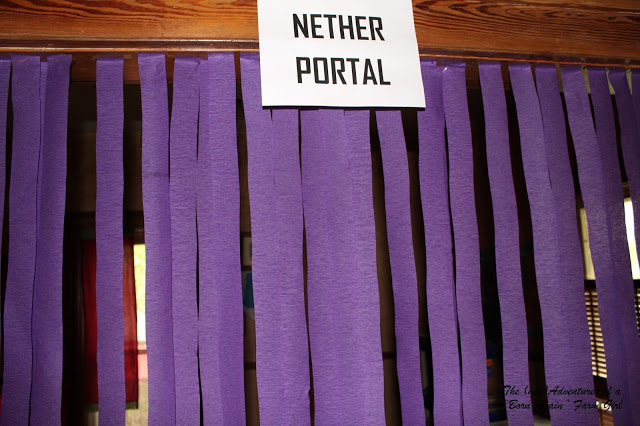 The first thing I did was make a Nether Portal. Portals can take you long distances in a game (I think) or to new areas. I believe the Nether Portal is the lower, scary world. If I am wrong, I don’t care! I just knew it had to be purple. I grabbed a two pack of purple streamers from the dollar store, printed off a sign on my computer and transformed a doorway into the perfect portal. 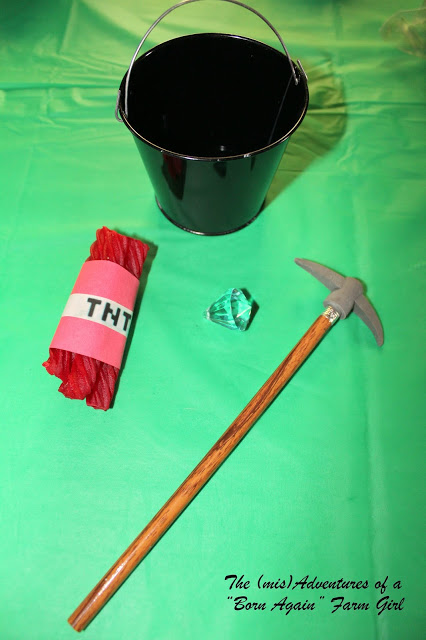 Next I put together “goody bags.” I found these adorable little metal bucket, which I filled with a pencil with a pick ax eraser, a gem and some homemade TNT. Oriental Trading is a great source of budget friendly items. For the TNT, I simply cut licorice sticks in half and wrapped them in red construction paper with a computer printed label I made. The kids all loved their buckets and wanted more gems. Lucky for them I had already planned the perfect game to win more. 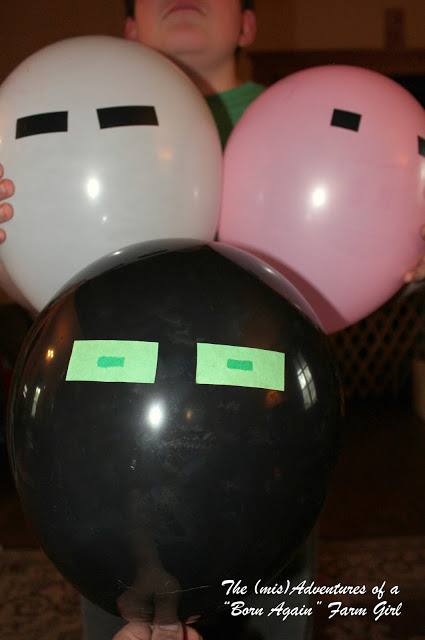 I picked up a bag of balloons and while some of them I just blew up, others I turned into game characters like the ghast, enderman and pig. I had the kids line up and gave them instruction of which balloon to bring back out of the pile of balloons. First person back got another gem to add to his mining bucket! Of course after running some of the energy out of them, it was time for snacks. 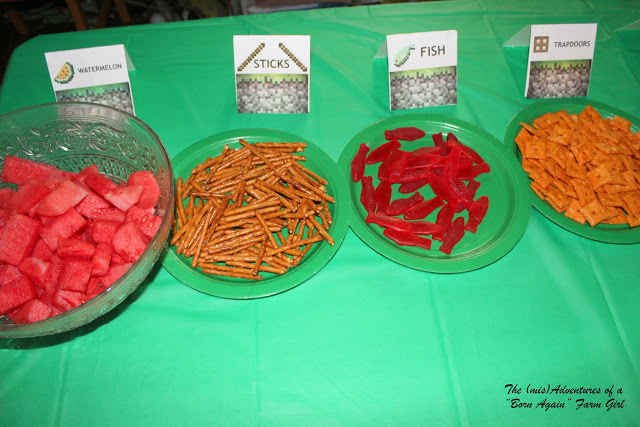 When I picked food for the party, I tried to keep with the whole Minecraft theme, but I didn’t want tons of candy and junk food. We had watermelon for the watermelon (duh), pretzel rods for sticks, Swedish fish candies for the fish, Cheese-its for the trapdoors and carrots for, well the carrots! It was nice to have healthy choices on the snack table to nibble and the kids loved them too. 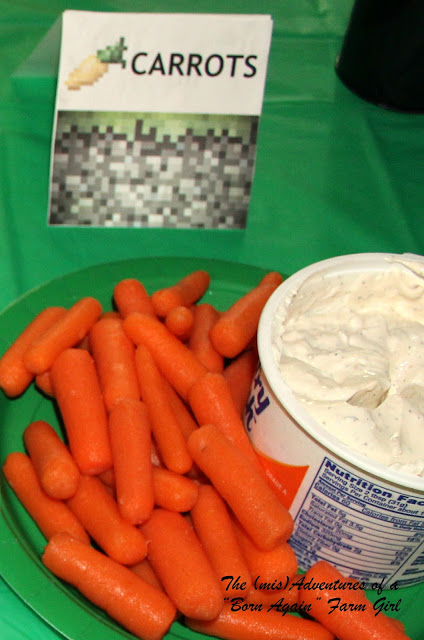 I made the food cards by googling images and then putting them all together in PicMonkey (free online photo editing program.) Once I inserted the images I made on PicMonkey into a word document and got them the size I wanted, I printed them off and glued them to cardstock table tents I made. 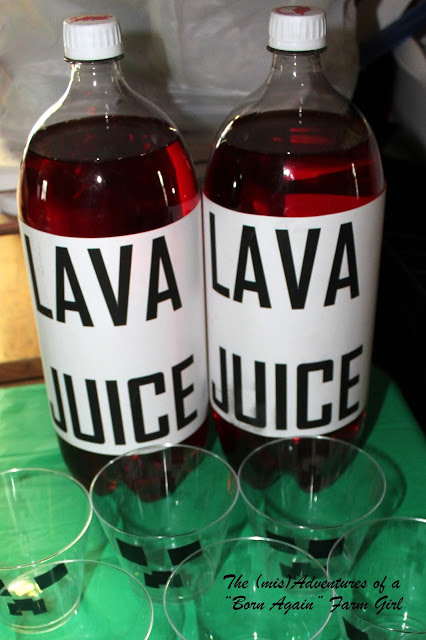 For the drinks I picked up a couple bottles of red soda and removed the manufacturer’s labels. I then made a simple “Lava Juice” label in a word document and taped it on the bottle. 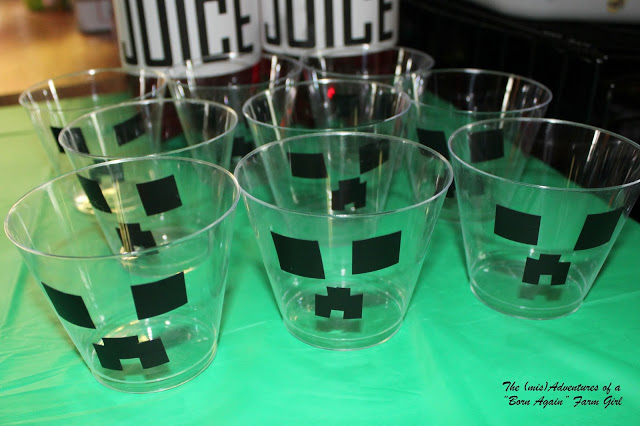 For the beverage cups, I picked up some clear cups at the dollar store. But what kid wants to drink out of a plane clear cup?!?! I grab a roll of electrical tape from my tool drawer and made Creeper faces on them. These were so easy to do, and they were a big hit. 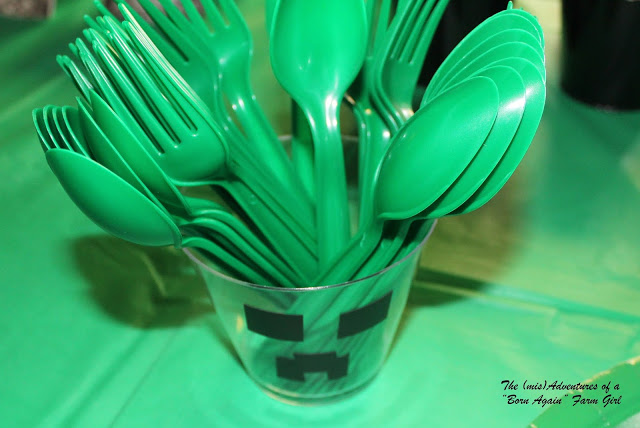 Not to mention they made great utensil holders! Since it was Minecraft, we went with a green “grass” color for the utensils and paper products. Of course all of that stuff came from the dollar store too! 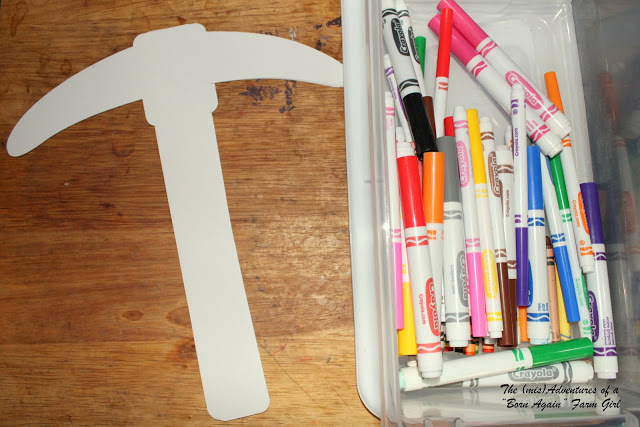 Once the boys finished stuffing their faces, it was time to keep them entertained. I had set up a “Make Your Own Pick Ax” area. You can buy the axes from Oriental Trading or cut them out yourself from card stock. This craft project was such a hit, that a few of the guests made more then one!! 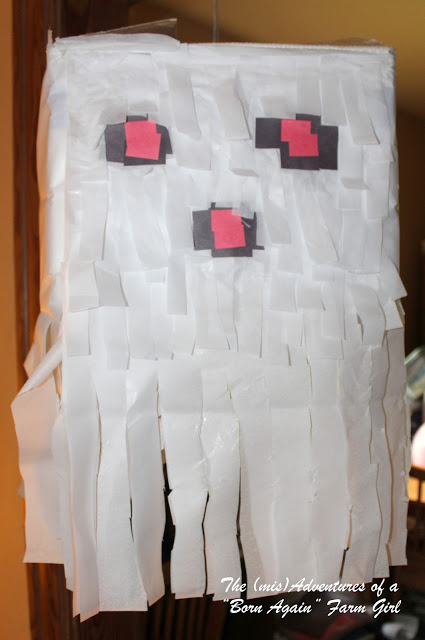 Next up it was time for a homemade pinata filled with candy and of course, more gems! I made this ghast from a box, construction paper for the eyes and mouth and strips of white tissue paper. It was easy to make and the tissue paper (which I didn’t already have on hand) was just a dollar. Of course my son informed me after the fact that a ghast doesn’t have that many tentacles. Oops. 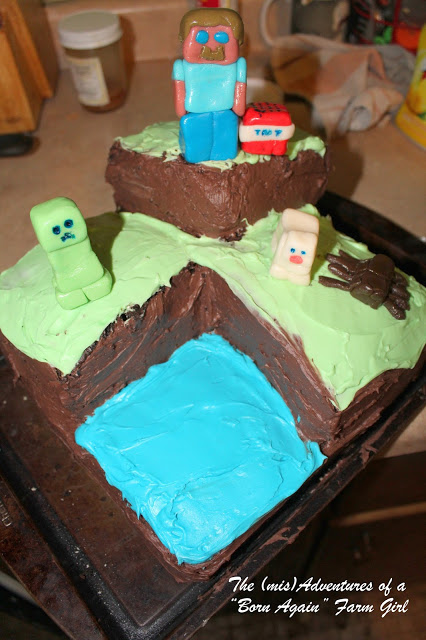 Of course the cake had to be Minecraft themed as well, so I tried to make it look like blocks by cutting out a square of the cake and moving it to the top layer. I made the dirt areas, grass and water with store bought frosting. I wanted to make it more pixel looking but I had a dentist appointment that morning. *pout* Oh well, ya do what ya can!
I did however manage to get the homemade fondant figures done the night before. While I didn’t find them as cute as the farm animal ones I had made for my other son’s birthday, I guess they hit the mark on what they were supposed to look like as the party guests had to have a good look at them all before we cut the cake. 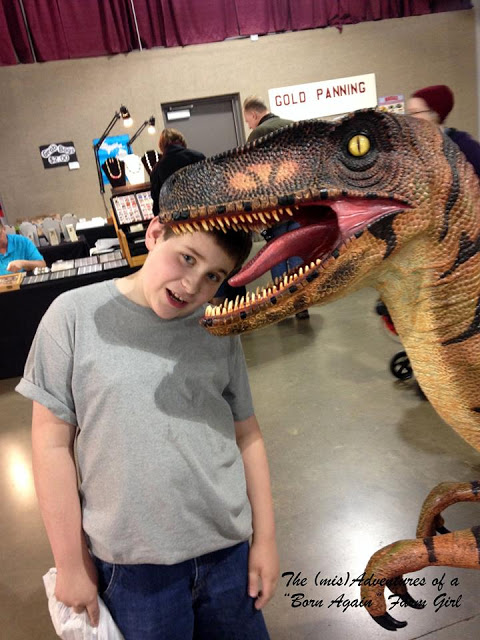 It is hard to believe my kid is a decade old. I know that as he ages, he will become too “cool” for mom made parties. But for now, I am glad I can make his birthday party dreams come true, even if it is on a budget!

18 thoughts on “Minecraft Birthday Party (on a budget)”