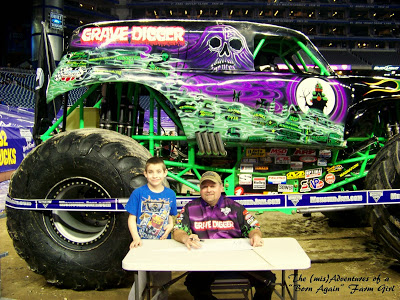 I love my small town, quiet country life. The quack of the ducks, the wind in the trees….. I am not one for the big city. I used to live in Chicago and well I just prefer my quiet. But what is a mom to do when she is offered a chance to take her oldest country kid to an event that she knows will thrill his socks off, but it means going to Detroit and LARGE crowds!?!?! She sucks it up and goes…. To Monster Jam.

Now our small town has a population of about 1,400.…. Ford Field, where the Monster Jam was held, seats 65,000!!!!! Can you say, holy crap that is a lot of people!!! Did I mention I really hate crowds? But my neighbor had scored us some free tickets and who was I to deny my son the chance to see his favorite truck, “The black and green crushing machine” Grave Digger? So off we went on a long drive…….. 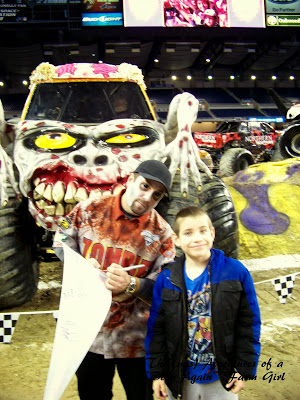 We got there in time for the “party in the pits” and I will admit, the oldest country kid was in awe of the trucks and drivers. He HAD to get autographs!!! I didn’t even know he knew what an autograph was, much less cared. So I dropped $10 on a Grave Digger pennant so he had something to get signed. He stood in lines with anticipation to have people he didn’t know, write something on an over priced piece of felt, and he was beyond the moon!!! And the show hadn’t even started!

By the time we took our seats at 5pm, his excitement was building. I on the other hand, well it was over a two hour drive there and we had walked around for what seemed like forever, and there were just too many people there for me. The show didn’t start for another two hours and I was ready to head home already. And of course the words “I am hungry” rang out from my child, so off to the refreshment stand we went. He wanted pizza but I just couldn’t spend $9 on one personal sized pizza. So I dropped $15 on a soda and popcorn for us to share (they had free refills on both!) 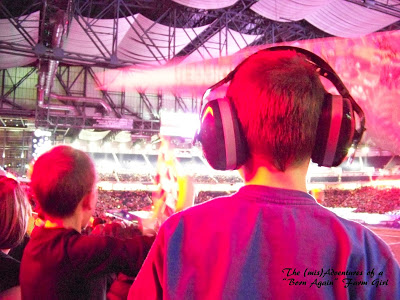 Time ticked slowly, there were a few trips to the bathroom as he was sucking down soda like a mad man, but finally the show started at 7pm. The lights, the sounds… the LOUD sounds… the smells… people screaming. It was overwhelming to me, but the country kid glowed like a kid at Christmas. We sat through the races only to have his little heart crushed when Grave Digger came in second. Seriously!?!? I mean we don’t even watch this stuff on television. But I managed to call his down in time for the freestyle portion of the show.

Up till then, I was counting down the seconds till we could get the heck out of there. But wait a minute…. This was kind of like figure skating or auto racing….. The crashes were awesome!!! Next thing I knew I was yelling and screaming right along side my little guy. Wait, I was having fun!!! Yes, I will admit it, my son’s excitement had gotten to me. So what if he had smacked me in the face a few dozen times with his over priced pennant as he showed his excitement. So what if we had visited the bathroom so much the people at the end of our row knew us. So what if I was dog tired… we were having a blast! 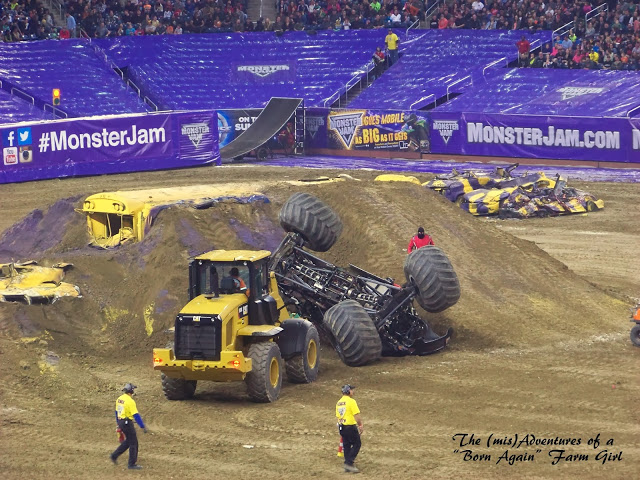 Now I will say I have NEVER been so happy as to walk in my own door at 1am. I drank in the silence. But for that Saturday, as long as it was, seeing my child beam with joy, was worth my quiet county being interrupted. 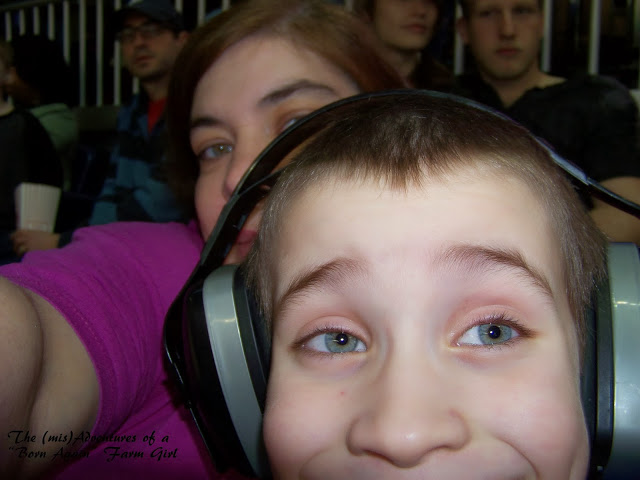