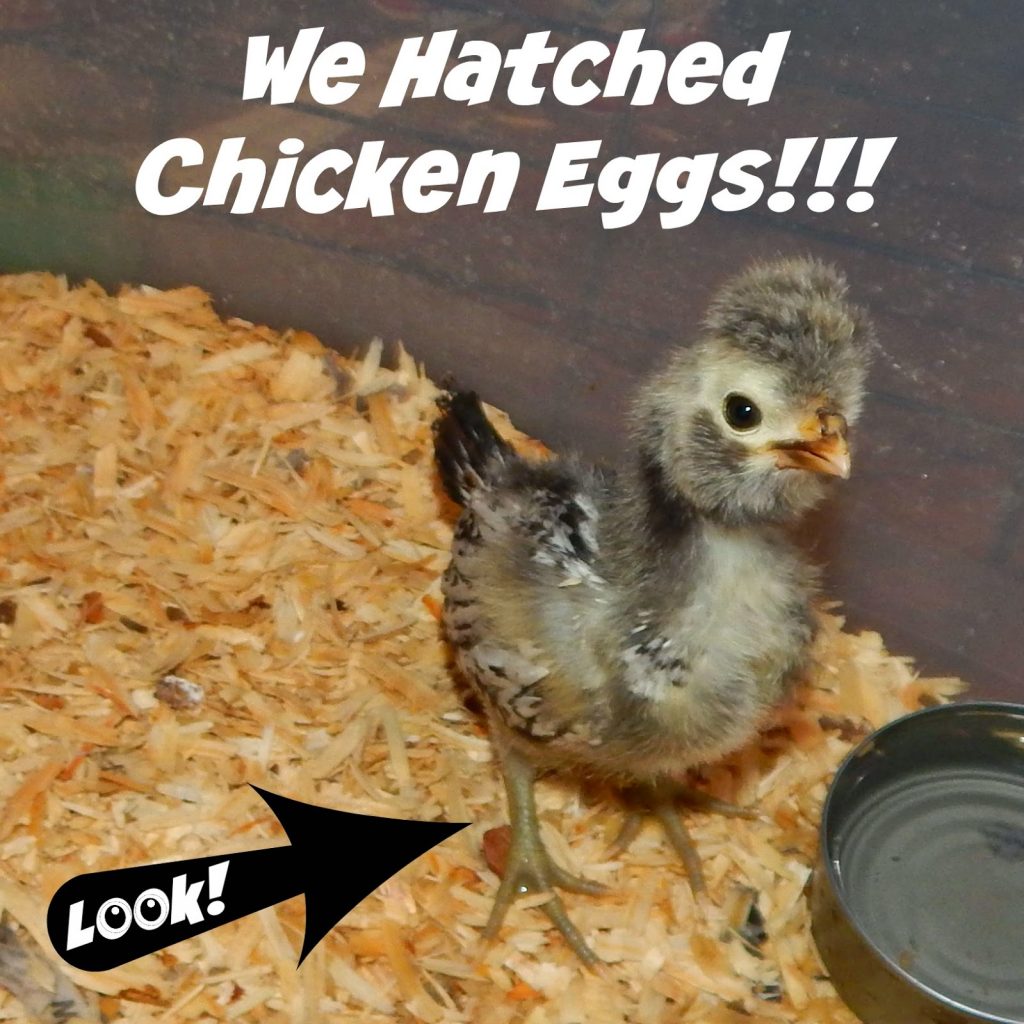 Late last fall a friend of mine offered us a dozen hatching eggs. Well winter in Michigan is no time to be hatching out chicks, so she waited till spring to send them to us. We have been on the most exciting adventure trying our hand at hatching our own chicks for the first time. I don’t know who has been more excited, the country kids or myself!!

When the eggs arrived we put them in the incubator and waited a loooong week before we decided to candle them. Candeling is when you use a light source to illuminate the egg so you can see what is going on (if anything) inside. We were so excited when we candled the eggs and found we had eight of them developing. I wrote all about it in a post called We’re Hatching Eggs! There is even video of a chick embryo moving you can watch!

It takes around 21 days, or three loooong weeks before eggs hatch. We ended up with one egg that stopped developing in that time. While disappointing, it does happen. The days seemed to creep by, so I wrote a post about Hatching Eggs, The Long Wait. The anticipation was beyond crazy and the country kids and I were so delighted when on the night of the 20th day we peeked into the incubator and saw an egg pipping!!!!! Pipping is when they make a little hole in the shell so they can learn to breath air. During this time they are also absorbing any remaining yolk into their abdomen. 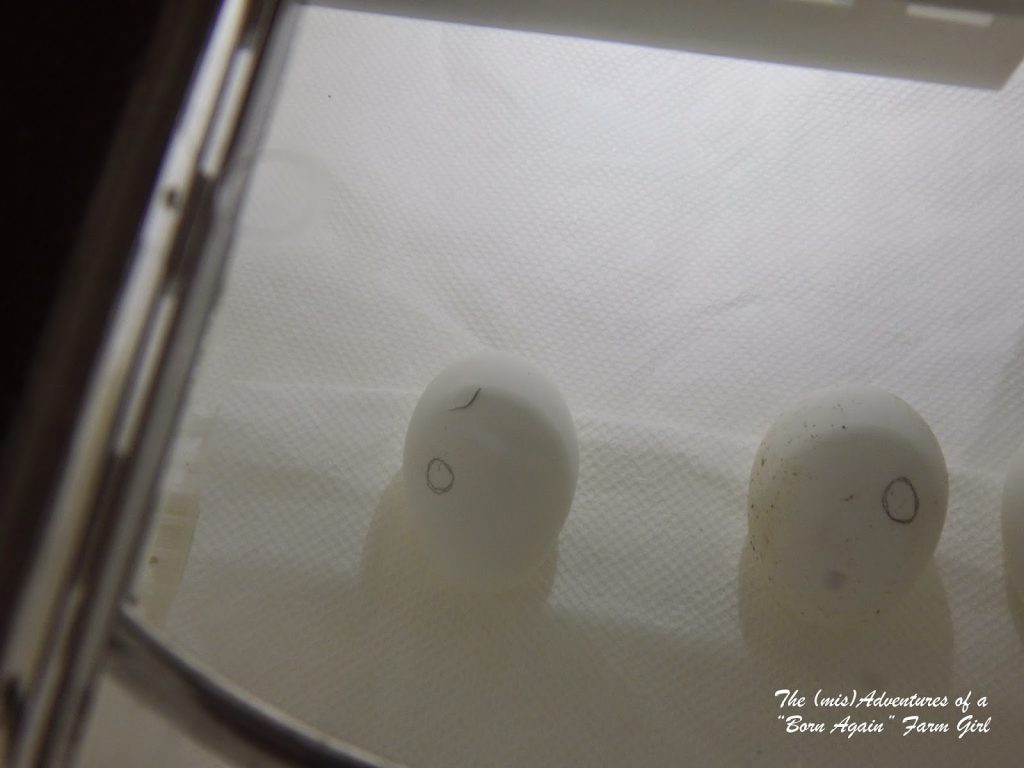 Our excitement shot through the roof!!! I had to remind the country kids (and myself) that it can take up to 24 hours from the time the egg pips, till it actually hatches. Not this little eggs! This chick was ready to escape its shell. It quickly “zipped” the egg (pecked a crack all the way around) and began to push on the shell. I have no idea how long we sat on the floor watching, but it was better then any television program!! We cheered, we encouraged, the littlest country kid begged it to come out. And then this alien foot shot out of the crack. Needless to say we were all screaming, gasping and freaking out! I was so NOT expecting a big old foot to come flying out of the shell like it did! 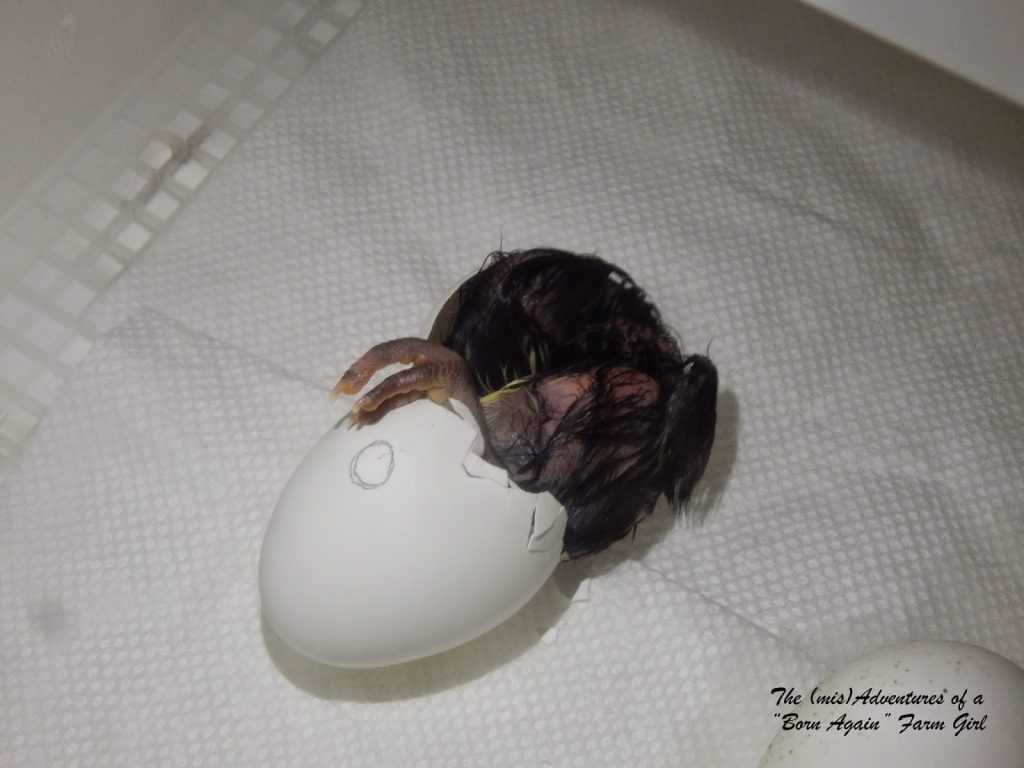 With a few more pushes, our over achieving, early bird was born!! Not only were we excited, but Heidi the Homestead Hound took a keen interest in the goings on! It was so funny to watch her, watch the chick. Her ears twitched to catch ever little cheep. 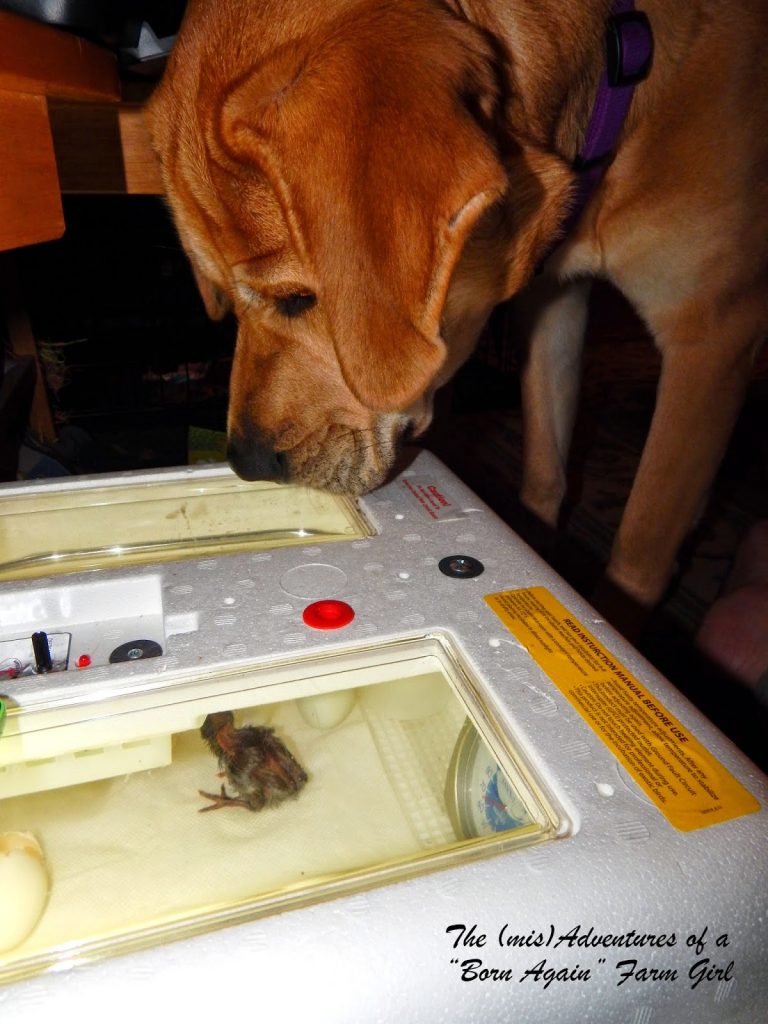 The country kids were disappointed when no other chicks had hatched by bed time, but I told our oldest, if he was still awake and anything happened, I would come get him. He was sound asleep at 2 am when the second chick arrived. I should have been asleep, but the excitement was too much! It was a good thing they both got up early on the 21st day, because the remaining eggs all hatched in just a couple hours. At once point we didn’t know where to look as three eggs were pushing at the same time! We did manage to catch the third egg hatching on video before the mayhem of multiple eggs hatching took over.

By the end of the day all but one egg had hatched. Sadly the last little egg never did. We left the six chicks in the incubator till evening so they could dry off and find their feet. Let me tell you, newly born chicks look like a bunch of severely intoxicated individuals! There was a lot of stumbling, falling and crashing into each other going on. 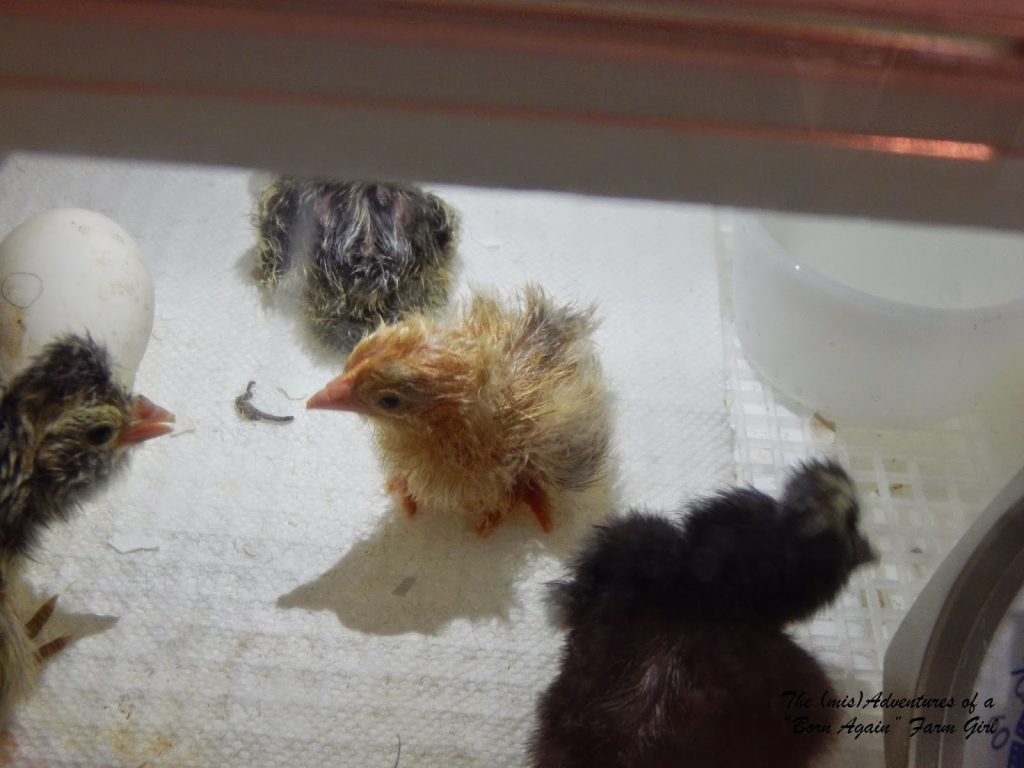 When the little chicks had finally dried off, we moved them to the brooder box we had waiting with a red heat lamp to keep them warm. It was so exciting to be able to hold them in our hands!! They very quickly took to eating and drinking and by bed time, I don’t know who was more exhausted, them after being born or me after coming off an adrenalin high and a lack of sleep for the last 24 hours! But I went to bed with a smile as the sound of their little peeps were music to my ears.

Trying to take photos of energetic little chicks proved impossible for me to get them all in the same photo, so around day 2 we did a little photo shoot of each of them and put a collage together of our new little puff balls. We ended up with a bantam silky, a few polish, and a little yellow “mystery chick,” who turned out to be a cross between a frizzled Easter Egger and a Splash Cochin. In other words, this chick is either gonna be beyond ugly or the cutest thing ever. 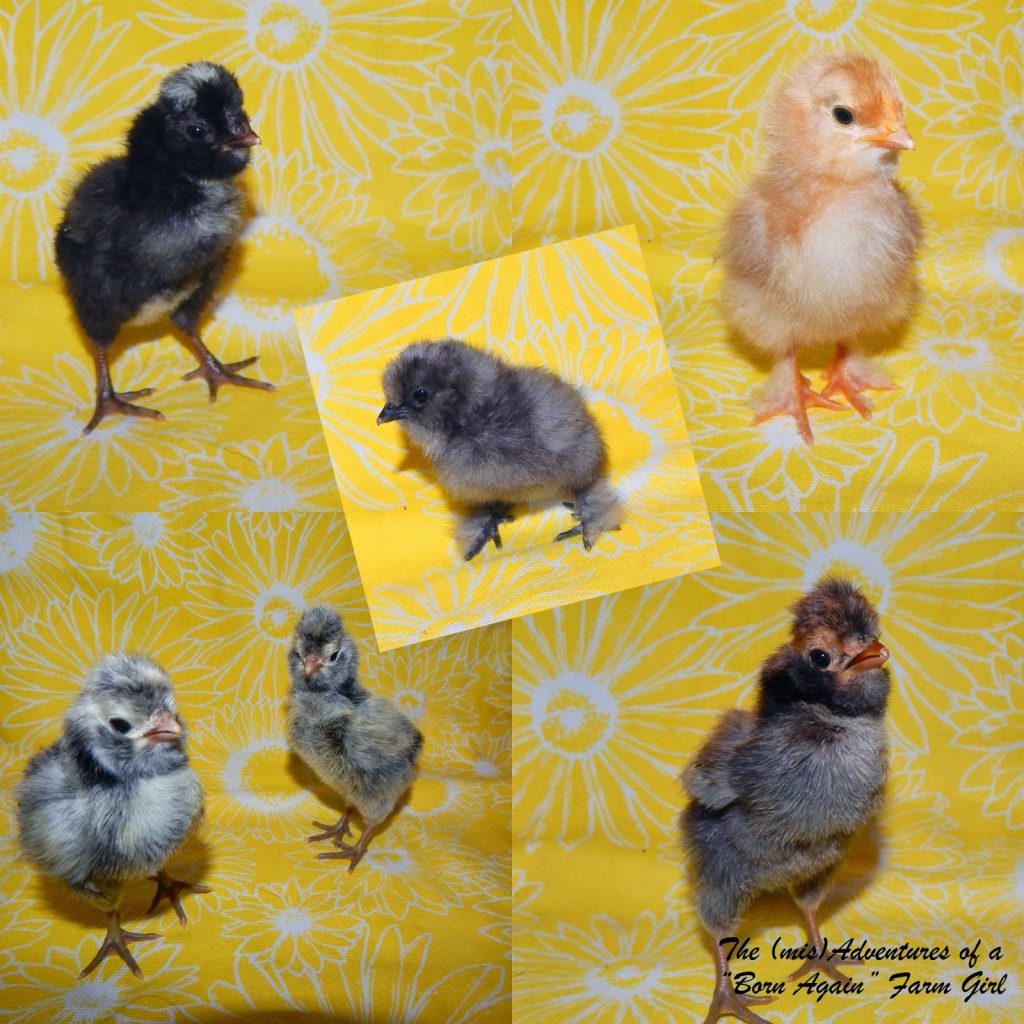 The chicks have grown very quickly and by the second week of life, they were ready to stretch their legs (and wings) and head outside for some supervised play time. Of course once we got outside, they were not so sure about leaving the box! 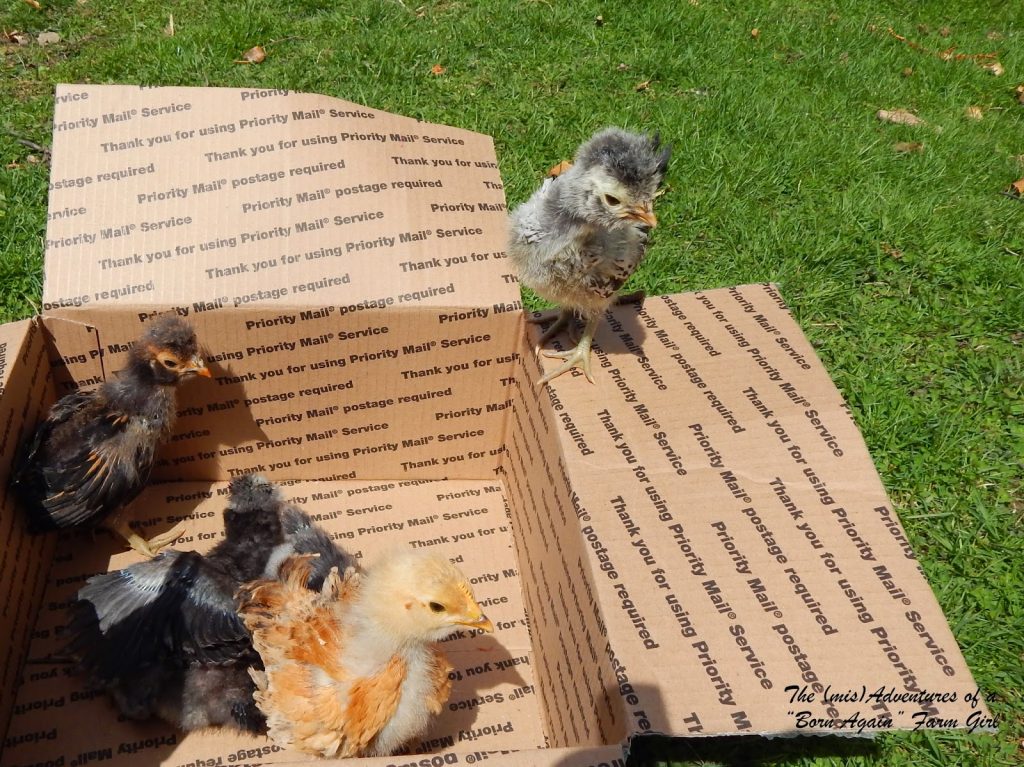 When they did finally leave the box, some of our other hens had to come over and inspect the new troops. Buffy (the hen on the left) is very interested in them and if she were ever to go broody, I think would make an amazing mom. Ester (on the right) and Grumpy Goldie however were not impressed. They have been through the “new kids” a few times before when we brought chicks home from the feed store. 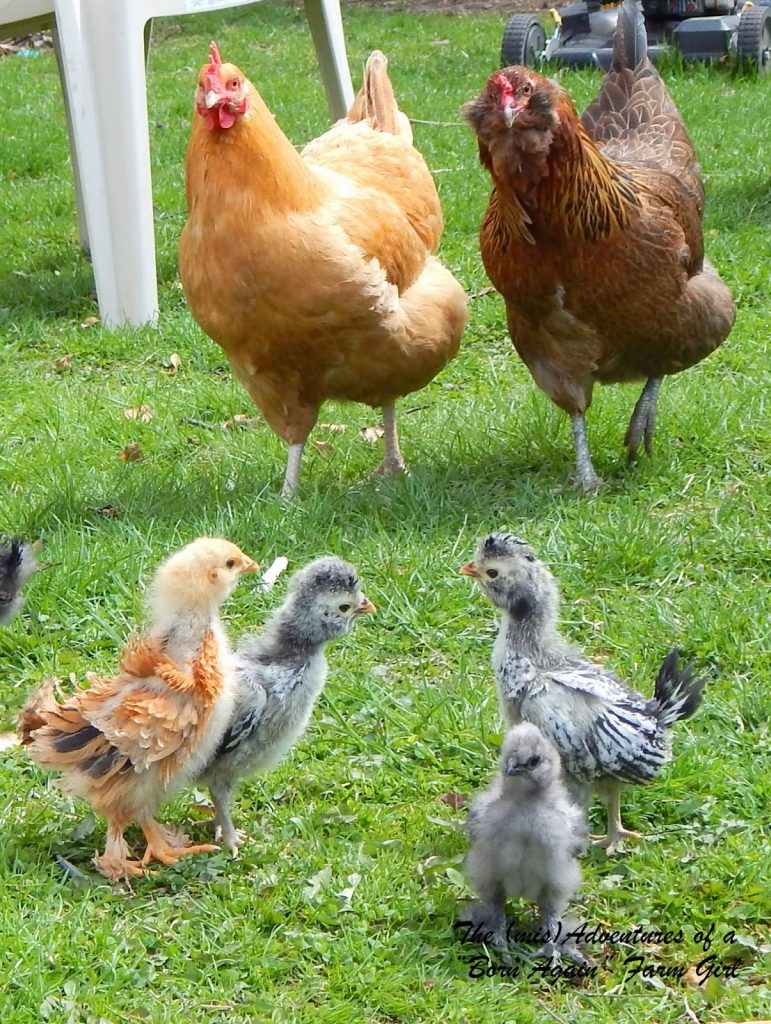 Our little chicks are now three weeks old and spend most of their day outside in an upside down baby play pen, where they run and flap, scratch and sunbath all under the supervision of Buffy, who checks on them often. 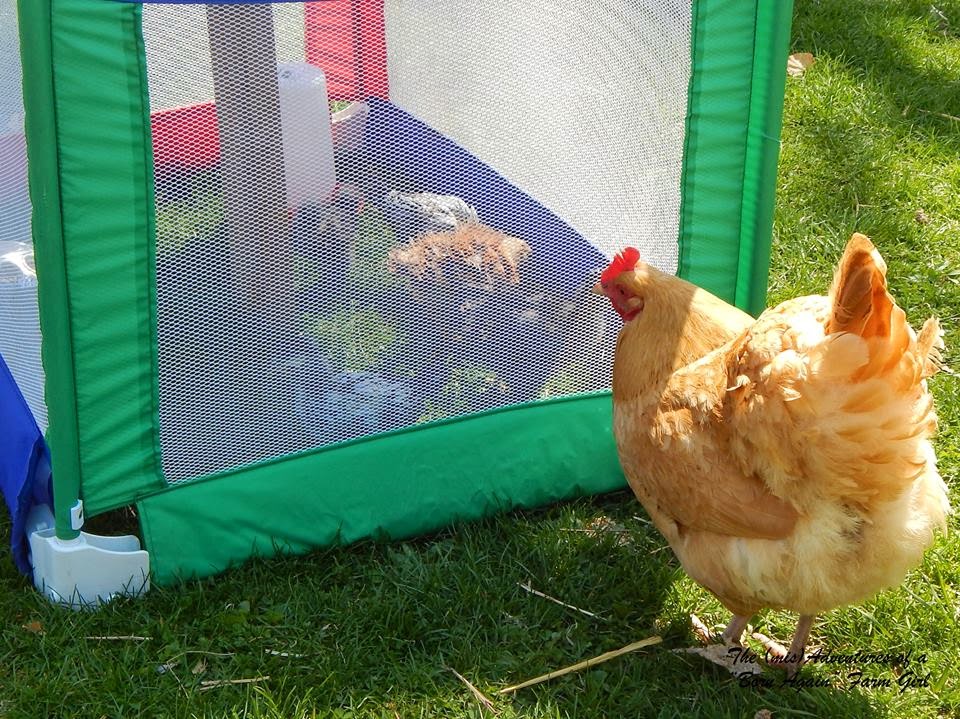 I am almost positive the little black polish will be a rooster, so we will need to find him a new home as we can’t have a roo where we live. I have my fingers crossed the little silky and the mixed chick are girls because I am very much smitten by them. Only time will tell….. Until then it is so fun for our family to watch them grow!