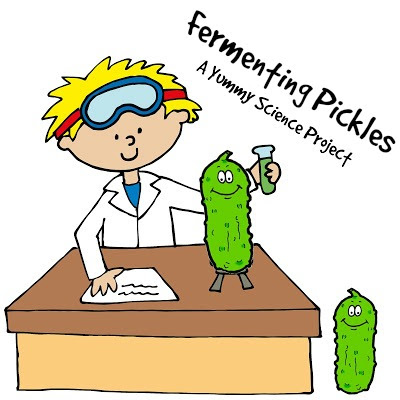 When it comes to homeschooling topics, we as parent pick topics that fulfill portions of our curriculum, like science or math. Homeschooling projects should also be about fun. And around here, homeschooling projects are sometimes useful and yummy too! We (meaning my hubby and I) have been using fermentation as a form of food preservation from some time, but recently it became a homeschool project that taps into history, science, math and more.

Fermentation in general terms, is the process of turning sugar to acids, gases and/or alcohol. If you like sourdough bread or nibbling on cheese, well you have already consumed products that use fermentation! But did you know you can also make fermented foods at home?!?! So let’s get started with some Lacto-fermantation shall we?

Lacto-fermantaion!?!? Whaaaa??? Basically, you are creating an anaerobic environment, getting the food away from the air by submerging it in a salt brine. The salt inhibits the growth of bad bacteria, while allowing the good bacteria to break down the sugars in the food and preserve it. And the best part, well other then getting some really yummy food you can store for an extended amount of time in your fridge, is that the food you are fermenting has that good bacteria (aka probiotics) on it when you eat it. Why is that good? Because it helps your gut bacteria!

What is a salt brine?

When your are fermenting veggies, they need to be in a brine. A brine is simply water and salt. But it is not that simple, you need the right kind and amount of salt. Why is salt so important? Because it makes fermenting possible! The salt in your brine keeps the bad bacteria from growing, while allowing the good bacteria, the lactic acid bacteria, to do the job of breaking down the sugars in the food and thus fermenting and preserving it. Too little salt and the bad guys run wild, to much salt and the good guys can’t do their job either.

Table salt – No, no, no, no, no and here is why…. Processed table salt has been “made over.” All the minerals have been removed and iodine added. While you might get table salt to work, trust me, when it comes to fermenting, your Grandma’s salt was NOT this salt. The added iodine can do bad things to the good bacteria.

Canning & Pickling salt – Now we are getting somewhere! You can totally ferment with this guy. We have Morton brand and I love how they say “plain salt, nothing added.” Well thank goodness, because do you really want to mess with Mother Nature?

Sea salt – We have just entered the “luxury car showroom” of salts! These are the guys that have the minerals! While there are different types available, we use pink ancient Himalayan sea salt, which has over 80 trace minerals.

How much salt do you use?

Well, it is going to depend on what you are fermenting. For the most part I like my veggies in a 4% brine. I don’t like things overly salty, I like to be able to taste the flavors and the food, not a mouth full of salty food. The nice thing about the internet is there are charts that tells you how many Tablespoons and teaspoons of salt you need to reach the percentage you want. What? You thought I was going to do the math for you? A quick Google search will bring up the info your looking for *wink*

A good rule of thumb when whipping up pickles is to use around 2 Tablespoons of salt per quart of water. Any more then that and they get way too salty for my taste. And you don’t want mushy pickles, so what to do? Keeping food crisp while fermenting take a few tips…..

Start with fresh cucumbers. I mean walk out to your garden and pick them or hit your local farmer’s market. If you do get them from a grocery store, don’t fear, there are still ways to retain crispy cucumbers.

Don’t worry if you don’t want whole pickles, there are ways to keep those cut up spears crisp! There are things you can add to your jar that have tannins in them, such as grape, raspberry and even oak leaves. Now I personally like to just open the cabinet and grab a black tea bag. Yup, that tea you drink has tannins in it. Simply take the staple out of the tea bag and slide the bag into your jar under the brine.

Sadly, in the last 100 years, fermented foods have all but disappeared from our diets in this county. Even the pickles you pick up in the store are not really fermented. *gasp* Really! Commercial pickles are made using vinegar (instead of just salt and water) and then they are pasteurized, which kills all the lactic acid bacteria. In fact most “fermented” food you can buy in the store have been pasteurized!
Did you know in the United States, 35 million people suffer from irritable bowel syndrome!?!? Millions more suffer from gut issues like ulcers, indigestion, chronic constipation or diarrhea. By eating fermented food, you can balance out your gut and improve your health.
Words to know
lacto-fermantaion
anaerobic environment
probiotics
brine
lactobacillus
tannins
carbon dioxide
lactic acid
pasteurized
If you are looking for more information/recipes on fermenting,
check out our Fermenting 101 posts! 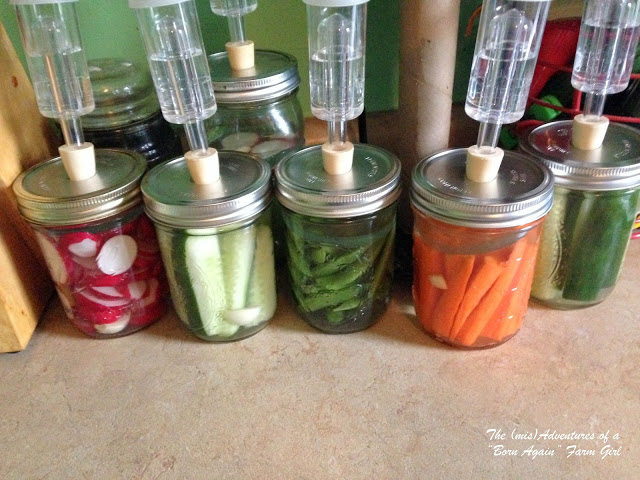