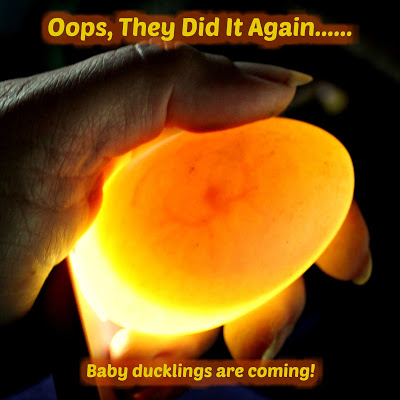 If you have been around our blog a while, you may remember last year how we got Betty (our female duck) a boyfriend because she was getting, ummm, mature, and that was one need I could not fill for her. Of course they “fell in love” and had a little family. If you aren’t familiar with the whole sorted story, you can read all about it over at our Duck Tales. Trust me, they are some crazy ducks!

Well as spring rolled around this year, Bill and Betty decided they wanted to do the whole parenting thing again. How do I know? Well because eggs stopped showing up where they should have been, and Betty would disappear for long periods of time. That could only mean on thing, she wanted to be broody (aka hatch some more kids.)

Ummmm, one word ducks, no! Wait, two words, absolutely not! Hang on, four words, no way in heck!!! We kept one of their children from last year’s hatching and three ducks was perfect for our backyard. So in April when I found this hidden in the raspberry patch……. 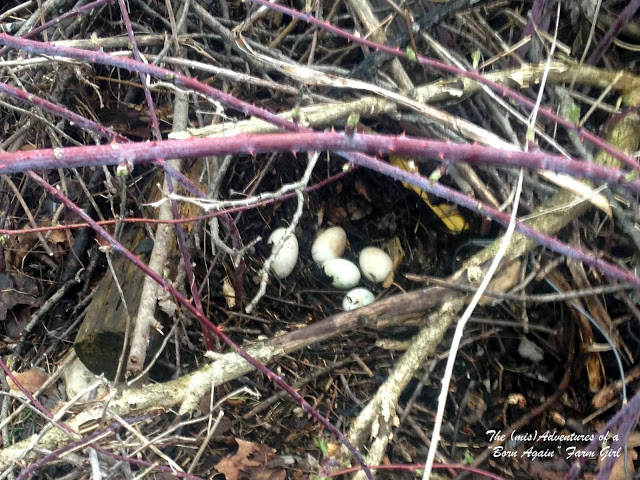 Betty and I had to have a little talk about how my hubby didn’t want her and her hubby having anymore kids. We did the whole duckling experience, and frankly it was just too much duck poo! Okay, they were absolutely stinkin cute when they hatched, but 10 ducks was too much poo. I thought she and I had an understanding. I apologized and that was the end of the discussion. Well until June rolled around and Betty stopped giving me eggs and started disappearing again. And that is when I found this……. 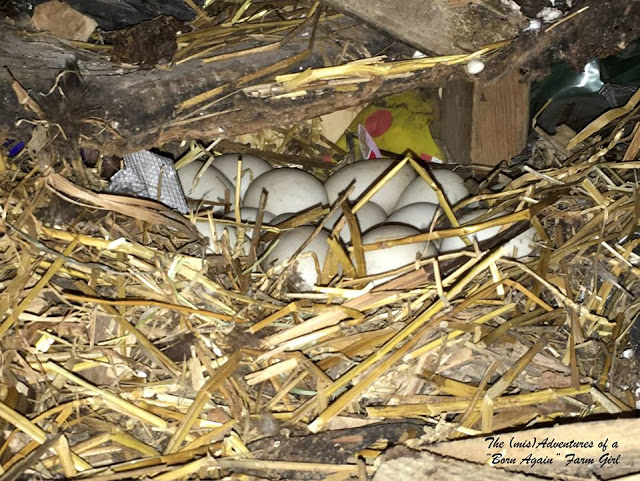 I’ll give her credit, she hid those eggs so far back in a corner, it was almost impossible to get them out! Again, I explained to Betty, this sooo was not going to happen. No more baby ducks. Period, end of discussion. That is until five days later, the chickens took up her cause and they ALL stopped laying where they should and I found this…… 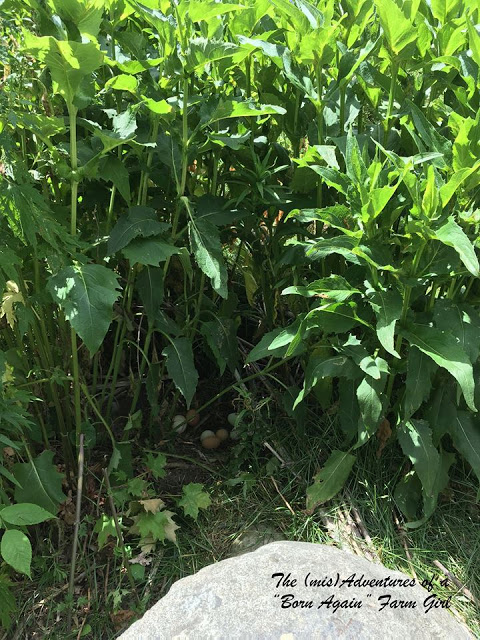 Grrrrrrr!!!! What part of “we are NOT hatching any more baby ducks” did she not get!?!?!? Thus far I had managed to find each nest before they started to develop and had removed the eggs. You see ducks (and chickens) will lay a large clutch of eggs before they decide to sit on them to incubate them and hatch them. I had a talk with EVERY FEMALE BIRD we owned and told them all to just cut the crap and accept that there would be NO babies this year.

And then the other shoe dropped….. at the beginning of July, Baby Girl (Betty and Bill’s daughter from last year) started to disappear. At this point, I was ready to pull my hair out! I went on another egg hunt and I found her in an even worse location then her mom had picked. If you look at the photo below, you can see Baby Girls eye peeking out in the red circle. 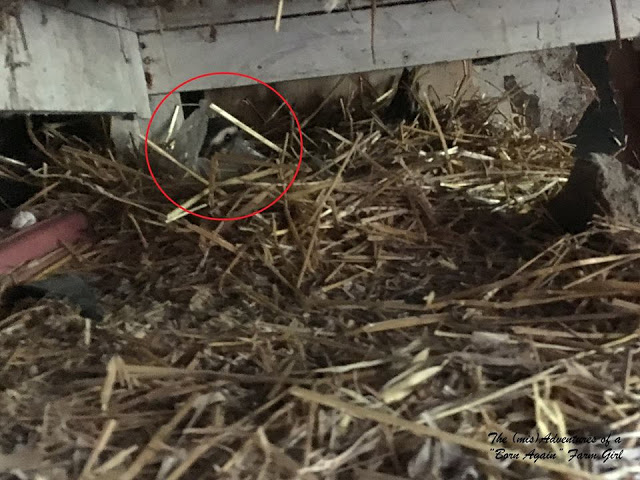 FINE!!!! I get it universe. Memo received Mother Nature. A duck is going to do what a duck was born to do and that is make more ducks. One way or another, one of my female ducks was going to sit on a nest. So I moved the eggs into a dog kennel (duck maternity ward) and let Baby Girl go for it. 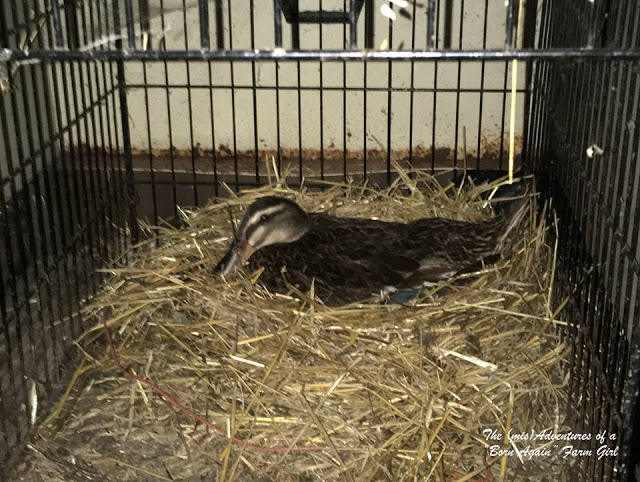 I honestly thought she would either reject the eggs because I had moved them or just loose interest as she is young. So for the next few days, I let Baby Girl play house. Either way, I didn’t expect what I found next……… 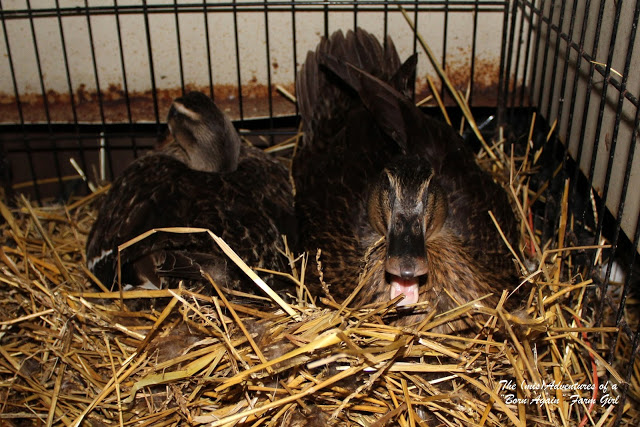 Today I found Baby Girl AND Betty both missing from morning pool time. Poor Bill was floating alone in the pool. So off to the kennel I went and there they were as smug as could be. I totally think Betty put Baby Girl up to this nonsense! I had been bamboozled! It was a bait and switch!! After three nests I had taken from Betty this spring, she and her daughter had finally won the war and were sitting proud as peacocks, sharing the nest of eggs.

Grrrrrr!!! Dang you Betty!!! I knew Betty meant business when it came to hatching eggs, so it was time to end this nonsense. If I let Betty keep those eggs, she would, without a doubt, infest my yard with a herd of cute, but full of poo, ducklings. I sent the littlest country kid into the pen and told him to grab me an egg. If they weren’t developing, the whole lot was headed to the trash.

Slowly my four year old slipped his hand under two upset female ducks and handed me an egg. I clicked on my smart phone, turned on the flash light and candled the egg. C-R-A-P…….. 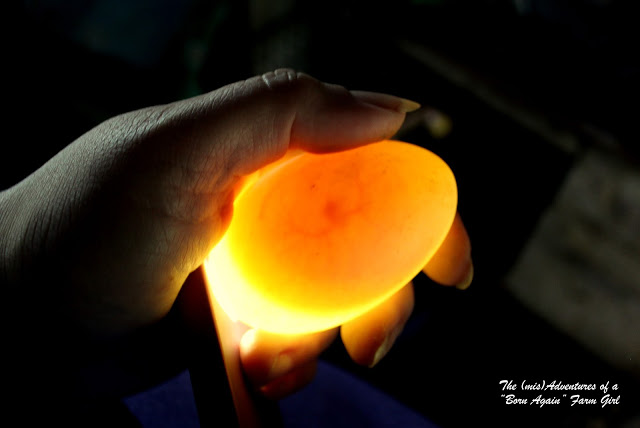 It was too late! That little dark splotch in the middle of the egg is a developing baby duck. I asked him to grab me another egg…. and it too was developing. Ugh!!!! Now I am no murderer, so I had him slip the eggs back under Betty and Baby Girl. *sigh*

Oops, they did it again…… Time to figure out when these eggs will be hatching and to prepare for the onslaught of duck poo. Hey, anyone want a baby duck????