Unless you live under a rock, you have at least heard of the phone app game gripping the nation called Pokemon Go. Heck, I live under a rock and not only have I heard of it, I got roped into playing it with the oldest country kid who is NUTS about the game.

Now before you go saying how stupid it is, what do you really know about the game? Seriously? Because you see, while some idiots may have walked off a cliff chasing a Pokemon, for the most part, this game, at least to me, has some positive benefits for today’s youth, my country kids included.

The oldest country kid has Aspberger’s which is on the autism spectrum. He used to like to sit in front of a computer all day and had a hard time socializing with others. Let me tell you, because of this game he now BEGS to go for walks! Not only that, he talks to the other kids and adults he runs into who are play. Since they have something in common, it makes conversation much easier for him. Not only that, he has roped me in, and it is now something he and I do together for fun!

So for those not in the know on the whole Pokemon Go crazy, I’ll give you the basics, and some of our own tips on how to play! 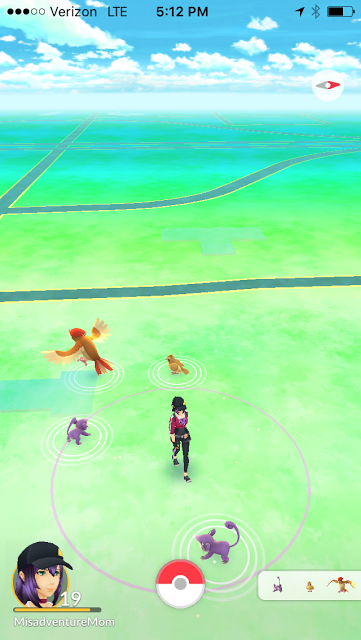 Once you have down loaded the app, you will be given the chance to catch your first Pokemon. Once you have caught it by swiping your finger on the screen to throw the ball, you will head out into the world and be greeted by a wide variety of Pokemon just waiting to be captured. Some are common place, others are rare, either way, you are going to need supplies to help you along the way to catching them all. 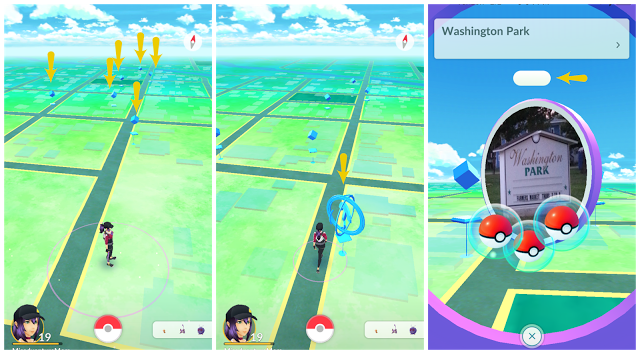 You need to visit Pokestops. These are the blue cubes on your screen. I marked the photos with arrows to show you. When you are close enough to a Pokestop, it changes and you can touch your screen, swipe the circle to spin it and get items. These items include the balls, raspberries, potions, eggs, and more. Pokestops reset every 5 minutes, so you can hit them over and over again.

You can also plug in lure models at a Pokestop. Lures bring the Pokemon to YOU! I had no idea how to put one in, so I will tell you now that I was shown. See the third photo? When you open a Pokestop, simply touch the white area above the image to install the module. Now sit back and what for the Pokemon to come rolling in.

The oldest country kid can not pass up a single Pokemon and is forever low on balls. Lucky for him, this old mama has mapped out a path through our little town where we can literally hit almost all the Pokestops in a few minutes. Well, it would be a few minutes if he would stop telling me to stop the truck so he can catch yet another Pokemon!

That is the thing about homesteading kid….. Be nice to your mama because she is going to have to drive your butt to a more poke infested area then your own backyard!!! And if you want time to put a lure module in and actually collect some Pokemon, you better get your mama hooked on the game too. Trust me, she does not want to sit at the park while you stare at a phone!! 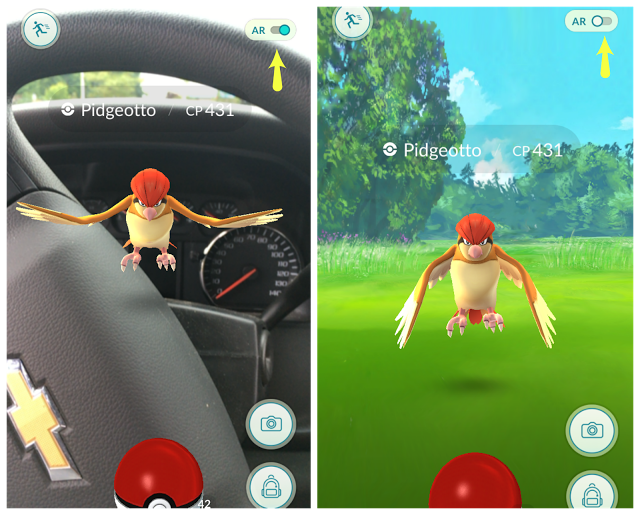 Now here is a tip that will seriously up your throw to catch ratio when collecting Pokemon….. Turn OFF the AR. While it is neat to see a Pokemon in your vehicle or on your brothers foot, it is much easier to aim with the AR off. 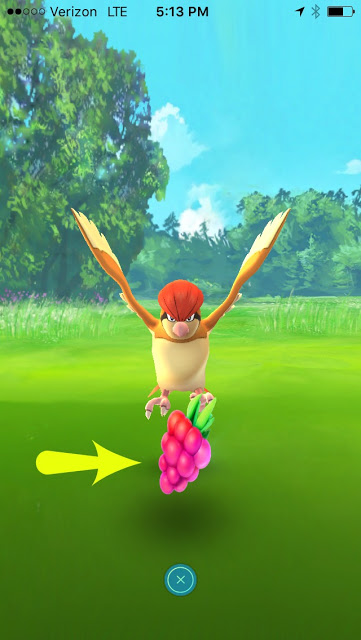 Next tip….. Pokestops give you raspberries. USE THEM. These little berries, which you will find in your items section, make the Pokemon like you, thus giving you a better chance of actually getting them in that darn ball. 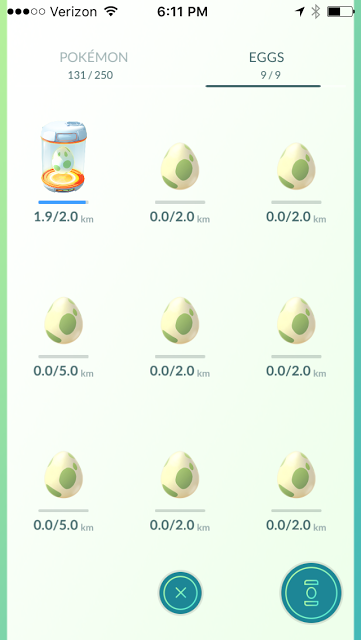 Another tip…… You get eggs in this game…… HATCH THEM. Every time one hatches, put another one in your incubator. Your incubator should never be empty. Why? Because you can hatch out some really neat Pokemon. Oh sure, now and again, you get a common Pokemon, but the longer the egg takes to hatch, the better your chances of getting something good.

You can locate your eggs by going to the ball at the bottom of your screen, tapping the Pokemon button and then swiping left on the screen. 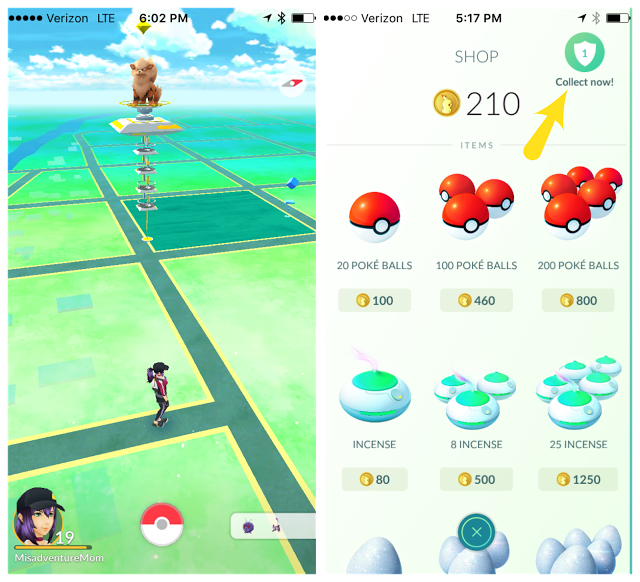 Now let’s talk about gyms. I didn’t see the point in them, at first, but than the oldest country kid explained them to me. There are three teams in Pokemon… Red, Blue and Yellow. You want to control a gym for your team to gain experience points for leveling up and to collect coins. Coins in Pokemon Go cost money, and this mama ain’t paying real money for fake money! But you get 10 coins a day when you have a Pokemon in a gym. Make sure you collect your bonus everyday!!

Also, when battling in a gym, take a friend, like your mom. It is much easier to take down a gym when you work together with another player!

The game says to “Catch them all” and you should! Why? Because even the Pidgeys and Ratattas, which you will get sick of seeing, will help you gain more XP. And every Pokemon you catch gives you stardust which you will need to power up your Pokemon into bigger and better Pokemon.

Pidgeys and Ratattas only need 12 candies to evolve, so save them until you are ready to use a lucky egg to maximum effect.  What is a lucky egg? It is an “egg” that doubles the XP you earn for 30 minutes. It is found in your items section. Use a Lucky Egg when evolving any of your Pokemon, aka collect up a bunch of Pokemon to evolve all at once and then set off the egg. You need XP to increase your trainer’s level, which will unlock more incubators and other goodies. When you stock up your evolutions and use a lucky egg you will level up much faster.

If there is no Pokestop nearby, you can always set off an incense (in your items) to bring Pokemon to you for 30 minutes. I have found these don’t work to well where we live. Guess Pokemon are scared of the country and prefer to stick to cities! LOL

So how do you get the best bang for your Poke playing time? Go somewhere where there is a Pokestop. We sometimes go to a Denny’s that has one nearby, on kids eat free night. Next plug in your lure module, set off your Lucky egg, start evolving your Pokemon, catch anything that appears! You will gain XP and level up in no time! 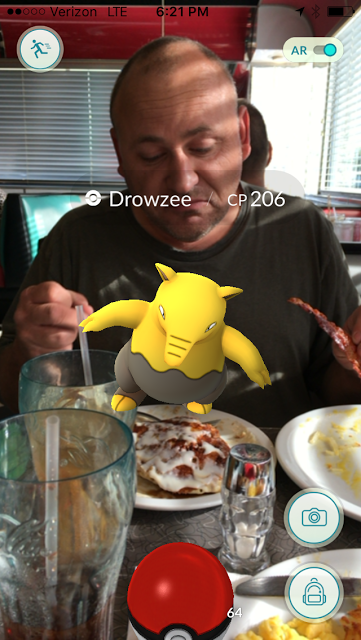 Of course, you always run the risk of a Drowzee dancing on your hubby’s pancakes when you Pokemon Go at a Denny’s! But all in all, it’s just good, clean, family fun. Well, except for the syrup on Drowzee’s feet!