We have a chicken named Goldie. She has never, ever, EVER gone into the “coop” (aka our shed with chicken door cut in the side) at night on her own. Never!! Through rain and snow I have had to carry her lazy fluffy butt. Last winter I actually fell while I was carrying her and I was pregnant. That was the day I told her she was on her own. 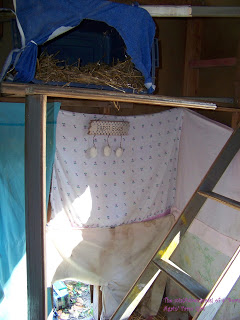 Her night roost of choice is the top rail on the stairs out our back door. Rain or snow, there she sits. So last week I decided to get the coop in order for winter. Basically the girls had a roost, and a nest box. (We only have two girls.) Our neighbor had replaced the flooring on her front porch and I scored some of the old boards that were taken off. I broke out my circular saw and hammer and with no real idea what I was doing, I started construction.

Goldie was beyond interested and checked in often to see what was going on. After much cutting and hammering I had built a ladder up to a platform for a nest box (yes that is a plastic tote on it’s side) and a couple of roosting areas. Old pillow cases were used to make the walls a little nicer and of course I had to hang a sign to decorate. I placed Goldie up in the nest box, walked out, shut the door and left her to investigate.

Now I will admit, it wasn’t the fanciest of things, it didn’t cost any money though, but it was worth all the work. You see, Goldie had also stopped laying for about a week. Not only did she start laying again (the curtain on the box may or may not have played a part, I have no scientific proof) but for the first time ever, she put herself to bed that night. And the next night. And every night since!!!

So what have I learned from my redneck coop makeover? Even chicken girls like a little something special every now and again. And while they will never get a chandelier or a fire place, I think a little more decorating now and then can be arranged. Great, now I am decorating for chickens….