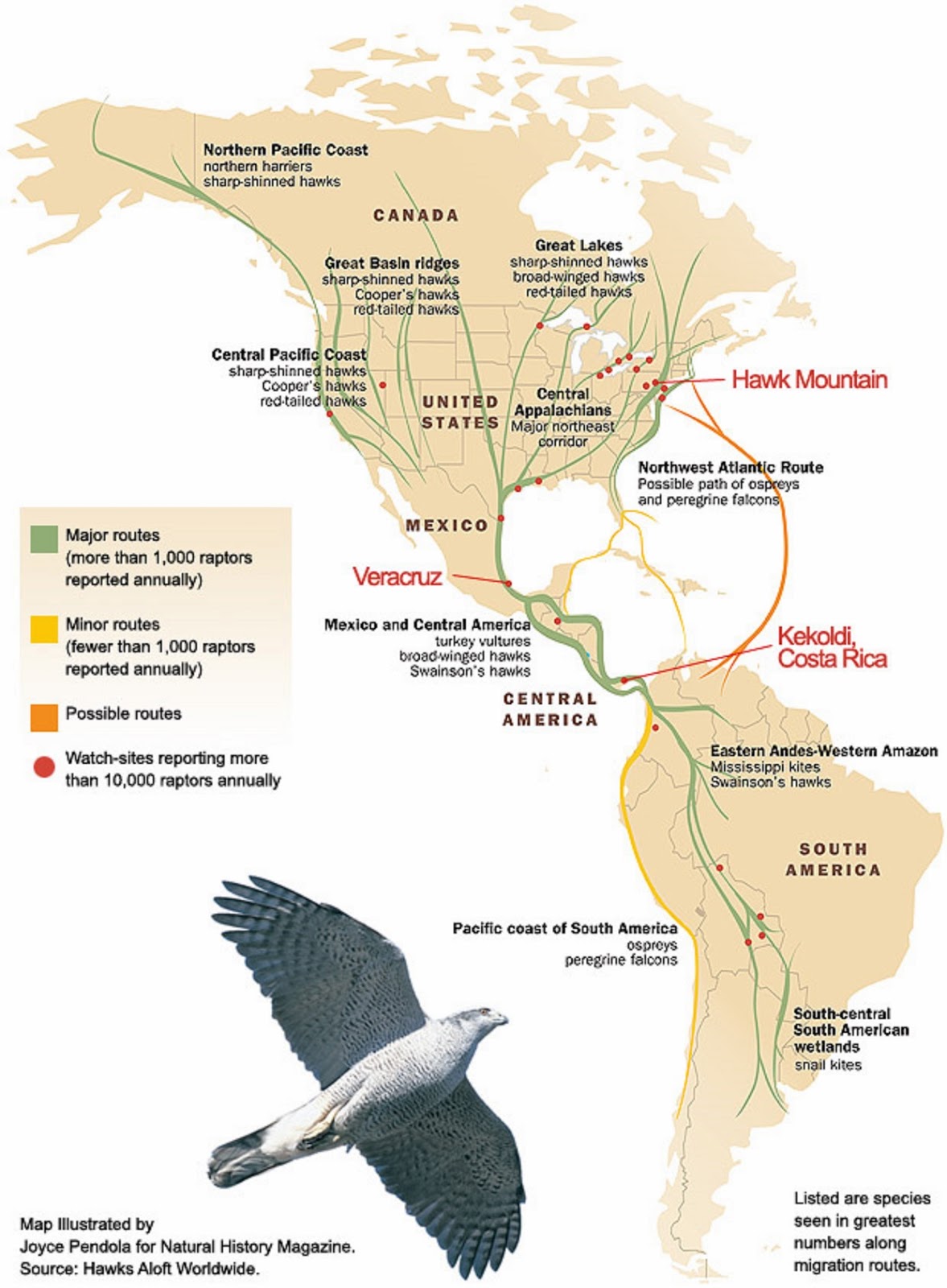 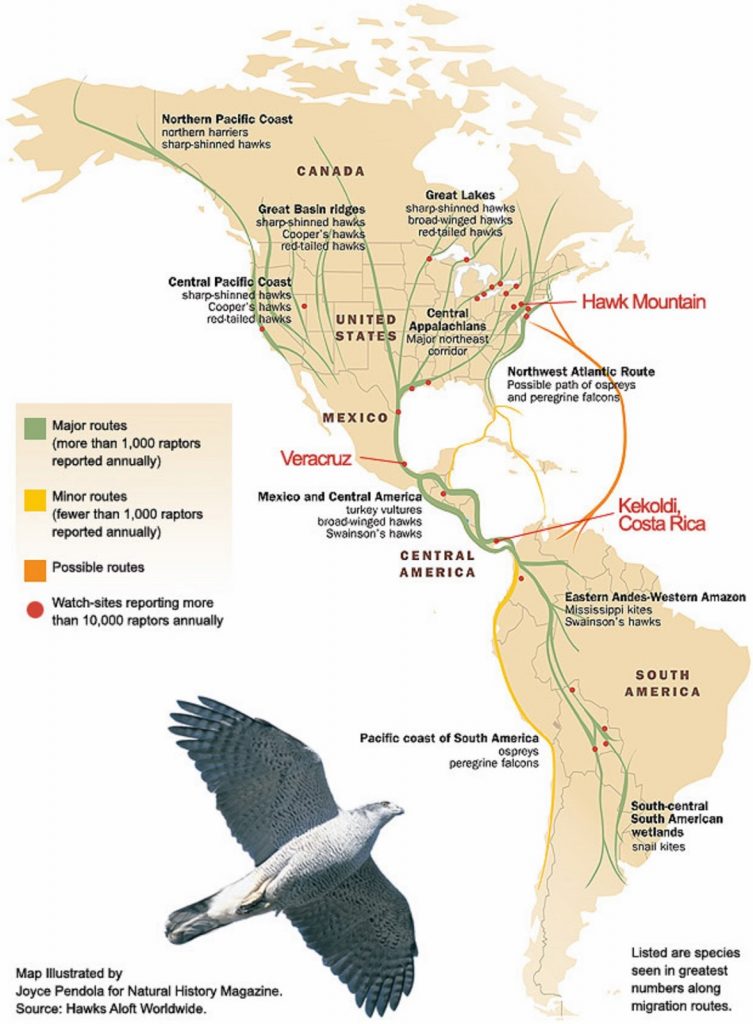 Heads up!!! No really, look up! Why? Well because it is fall raptor migration time and if you have chickens, well, you need to be aware. Hundreds of thousands of hawks, eagles, ospreys and falcons are currently winging their way south and possible past your coop!

Most hawks are soaring birds…. that means they depend on updrafts to help them travel. Large bodies of water have no updrafts, so the raptors tend to follow land routes. This means they will follow shorelines in order to get around large bodies of water. Here in Michigan this is especially true. Bird watchers LOVE this fact and raptor viewing over by lake Erie is a highlight this time of year.

So how do you know when to start watching out for these predators from above? Well, different species of raptors migrate at different times. Thanks to the bird watchers and their research, we know that for example the Broad-winged Hawks peak in their migration in September. Red-tailed
Hawks, on the other hand, are a little later and reach their peak migration in November. After looking at all the data out there, and there is a lot, just assume you will need to be vigilant from late August till the end of November which is peak migration time for most raptors.

Be vigilant! You need to keep a close eye on your flock and set up protection for them. A lot of these migrating raptors are younger and willing to take more risk when looking for food…. food like your chickens. But what can you do? Make sure your coop and run are secure from all sides, including above. If your chickens don’t have an enclosed run, well you are taking a chance, so make sure you have a lot of places they can hide if you are along a migration route. When you let your chickens out to free range, stay close by and keep an eye to the sky. Since these raptors are migrating in such large numbers, where there is one, well, assume there is more. If they pick off one chicken, others may notice this is an easy meal.

How do I know this? Because it happened next door to me last fall. My neighbor also has chickens and last fall we had a hawk stop by to visit our flocks. For three days that stinking hawk was totally focused not on my coop and free ranging chickens and ducks (who I might add, kept their fluffy butts in the coop) but the penned up chickens in my neighbor’s yard. It was obvious this hawk had had chicken before and was trying to figure out just how to breach security. He was so bold as to stand on the ground right next to the pen in full view, scooping the situation and pacing back and forth. I was getting seriously tired of running out there and yelling at him!

Yes, I yelled at that hawk, because at least in the state of Michigan you are NOT allowed to so much as turn a water hose on a raptor. This guy was legally covered better then most folks in witness protection! The final straw came when I was in the kitchen, minding my own business, baking cookies and as I went to put the flour back in the cabinet, I passed the window and that dang hawk was sitting on MY fence not 10 feet from me. Oh no, no, no sir, I do not think so. I had left the pop door of the coop open just in case my chickens wanted to come out…. they were smart and knew better…… but since I had seen this hawk strolling around my neighbor’s pen, well I quickly wiped my hands, put on my shoes and went and closed the pop door on the coop. I was not about to let the hawk stroll right in for an all you can eat buffet at my place.

So what can you do when a hawk comes to visit? I called my neighbor and told her to pick up some mylar balloons on her way home from work, we were throwing a party! My neighbor brought home a few balloons that had NOT been filled with helium. You see the temperatures were dropping around here and helium shrinks in the cold. How intimidating would a flat balloon be!?!?! So she blew them up with her breath and hung the balloons around her pen. Then we waited. The balloons blew in the breeze, turning and flashing. And do you know what….. I kid you not…. that hawk left! Now I don’t know if it was the Elmo balloon that did the trick or not….. but it freaked me out to look out my window and see Elmo blowing around!

So, let’s just say on the off chance you DON’T want Elmo hanging around, there are other options to deterring raptors. I have heard of people hanging old CDs, placing pin wheels, and there is a great product out there that act just like the balloon, called Predator Tape from Nite Guard. I have of roll of the tape now on hand for just such occasions. Sorry, I’m not an Elmo fan!

To learn more about how to identify raptors, head over to Hawk Mountain. The have some very good information there. And remember, knowledge is power… if you know they are coming, you can be prepared… and maybe even enjoy sighting some amazing new feathered friends.

**Homestead Tips on Tuesday is a weekly series where we help you learn skills, tips, and trick to help you on your journey of homesteading. Many places post list of things you should/could do as far as homesteading skill, but I feel lists are at times overwhelming and can make people give up before they even start. So every Tuesday I share one thing for you to try or consider. I hope you join us every Tuesday and I would love to hear about your adventures with each weeks topic.**

20 thoughts on “When Raptors Come to Call”